Ahead Of PM Modi's Rally In Srinagar, Black Balloon Protest Near Venue 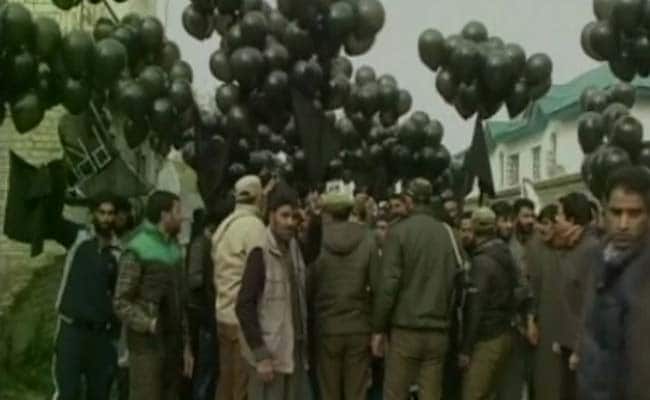 Srinagar: Jammu and Kashmir lawmaker  Engineer Rashid was detained in Srinagar this morning for holding a black balloon protest near the venue of Prime Minister Narendra Modi's rally.

Last month, the Independent MLA was thrashed by a group of his BJP colleagues in the Jammu and Kashmir assembly for hosting a beef party, which was in protest against beef ban in the state.  Days later in Delhi, he was also attacked with ink.

Prime Minister Narendra Modi is scheduled to address a rally at the Sher-i-Kashmir cricket stadium in Srinagar shortly, where he is expected to announce a major economic package for the state.

Some separatist leaders had threatened to disrupt this rally. In the wake of their threat, mobile Internet services were blocked in Srinagar this morning. The services will remain suspended from 10 am till 2 pm.

This is the PM's first visit to the state after the PDP-BJP coalition came to power. After the rally, PM Modi will also inaugurate the second phase of the Baglihar hydel project and lay the foundation stone for the four-laning of the Udhampur-Ramban and Ramban-Banihal section of the Srinagar-Jammu national highway.

Sources in the government says say the package that the PM is expected to announce could be anything between 75,000 crore to 1,00,000 crore, most of which would be spent on infrastructure development.

Some separatist groups have called for a rally at the Tourist Reception Centre ground, a stone's throw from Sher-i-Kashmir cricket stadium, to counter the PM's rally. To foil their plans, all entry and exit routes have been sealed in Srinagar. Curfew likes restrictions were enforced on Friday to prevent protests.

Several separatist leaders have been taken into preventive detention while some others have been placed under house arrest. Over 300 separatist supporters have also been arrested. The government has also launched a massive online crackdown to prevent rumours and blocked over 50 Facebook and Twitter pages.

Police have set up a special cell to monitor social networking sites and many more Facebook pages and Twitter accounts supporting the separatist march are likely to be blocked, officials said on the condition of anonymity.

Unprecedented security arrangements are in place and restrictions have been imposed in most parts of the city for the PM's visit. Sher-i-Kashmir stadium, the venue for the PM's rally, has been turned into a fortress. A large posse of police and paramilitary personnel has been deployed in and around the area to secure it. Many CCTV cameras have been installed near the venue to keep an eye on the movement of people.