"That's How I Learnt To Speak Hindi...": PM Modi Shares On Facebook Site

PM Modi remembered his life as a village boy and his early inclination towards the RSS or Rashtriya Swayamsevak Sangh, the ideological mentor of the BJP. 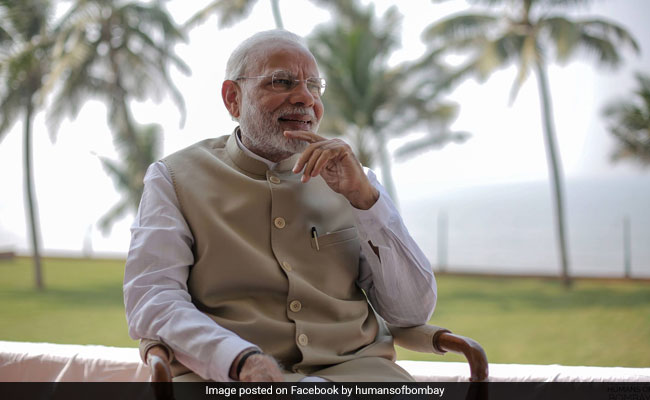 PM Modi said he went to the Himalayas at the age of 17.

Prime Minister Narendra Modi, in an interaction with a popular Facebook page, reminisced about his childhood, and talked about two years in the Himalayas that, he said, set him on the path of spirituality. In a couple of posts, the page "Humans of Bombay" shared PM Modi's story in his own words. He remembered his life as a village boy and his early inclination towards the RSS or Rashtriya Swayamsevak Sangh, the ideological mentor of the BJP. He also shared an interesting story of how he learnt Hindi.

The PM said he lived with his family of eight in a small house in which his mother used traditional forms of curing and healing to her newborns and small children.

"Through the night my brother and I would take turns to keep the 'chula' (clay stove) going for her to use. She didn't have the good fortune of getting an education, but God was kind and she had a special way of curing ailments. Mothers would line up outside our house every morning because she was known for her healing touch," PM Modi said.

PM Modi talked about his father's tea stall at the local railway station, and said working there was fun for him as he got to meet people from all over the country.

"I would open my father's tea stall at the railway station, clean up and head off to school. As soon as school ended, I would rush back to help him, but what I really looked forward to was meeting people from all over the country," he said.

From the stories that PM Modi listened to from the travellers at the station, he polished his Hindi. "I would serve them tea and listen to their stories - that's how I learnt to speak Hindi," he said.

PM Modi was an avid reader as a child. "I was always curious," he says, adding he would go to library and read everything he could get his hands on.

He also remembered the first RSS meeting he attended. "I was 8 when I attended my first RSS meeting, and 9 when I was a part of an effort for the betterment of the lives of others - I set up a food stall with my friends to help the victims of the floods in parts of Gujarat. I wanted to do more, but I was aware that we had little means," he said.

Even with limited means, PM Modi tried to look sharp. He explains how he would iron his clothes. "If the way was ever difficult, I made my own way. I had a great need to look sharp and groomed. So, even though we couldn't afford an iron, I would heat some coal, use an old 'lota', wrap a cloth around it and press my clothes - the effect was the same, then why complain?" he says.

"I went wherever God wanted to take me -- it was an undecided period of my life but still, gave me so many answers. I sought to understand the world, to understand myself. I travelled far and wide, spent time at the Ramkrishna Mission, met sadhus and saints, stayed with them and began a discovery, inwards. I moved from place to place -- I had no roof above my head, but still never felt more at home," he adds.

"That's when it all changed. After two years, I returned home with clarity and a guiding force to lead the way," he says.