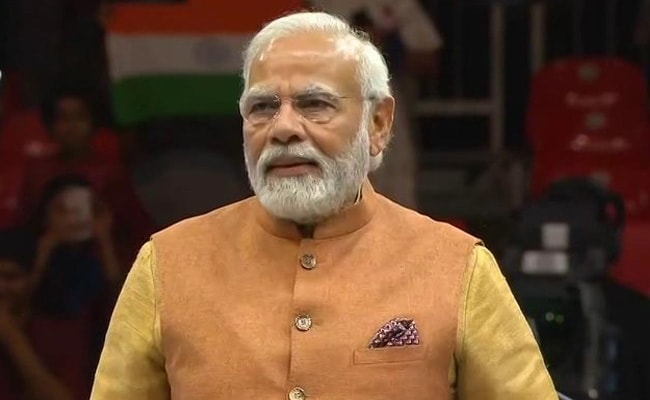 Prime Minister Narendra Modi arrived in Germany's Munich today to attend the G7 summit. He will hold meetings with G7 and partner countries and will hold discussions on issues ranging from environment, energy, to counter-terrorism.

Here are the Highlights on PM Modi's Munich visit:

Get NDTV UpdatesTurn on notifications to receive alerts as this story develops.
Jun 26, 2022 19:35 (IST)
"Roadmap Is Ready For The Next 25 Years": PM Modi In His Address

The Prime Minister said the roadmap for the next 25 years is ready when India will celebrate 100 years of its Independence.

"India is now becoming the centre of traditional medicines. We have made the world hold their nose with the power of yoga," Prime Minister Modi said.

The Prime Minister concluded his address by saying that Indians who have settled in foreign countries are India's envoys, its brand ambassadors.
Jun 26, 2022 19:27 (IST)
"Made In India Vaccines Saved Lives Across The Globe", Says PM Modi

Prime Minister Narendra Modi in his address to the Indian community said the, made in India vaccines saved many lives across the globe.

The PM said almost 90 per cent Indians are fully vaccinated. This is the same India about which people said that it would take almost at least 10-15 years to vaccinate everyone in the country."
India is celebrating the 'Azadi Ka Amrit Mahotsav' to mark 75 years of Independence. India is seeing how the biggest powers of the world want to walk shoulder-to-shoulder with us, the PM said in his address.

Talking about the increase in exports, the PM said, "India achieved the milestone of highest exports till date. It shows that the world is looking at us with hope."

"We want to increase our export targets even more next year and you can help us achieve that," PM Modi added.

The Prime Minister said the 'hota hai', 'chalta hai' (It happens, things happen like this) mentality is India's past. It has changed to 'karna hai', 'karna hi hai', 'samay pe karna hai' (have to do it and do it on time) is the new principle.

"In IT, digital technology, India is achieving new milestones. Today, India is making new records in data consumption. India is among those countries where mobile internet data is the cheapest in the world," the Prime Minister said.

The PM talked about the the drone technology and how it is being used in natural calamities. The government has started a new scheme - an ownership scheme under which drone are used in land mapping, the PM said.

A new unicorn is being created every 10 days in India, Prime Minister Narendra Modi said in his address to the Indian community. On an average 5,000 patents are being filed every month, the Prime Minister said.

Over 500 railway coaches are being made every month and now almost 18 lakh homes have piped water connection, the Prime Minister added.

"If I'll keep talking about the achievements of Indians, it will cross your dinner time." Prime Minister Modi said.
Jun 26, 2022 19:00 (IST)
PM Modi Addresses The Indian Community In Munich

Today (June 26) is historic, 47 years ago, there was an attempt to suppress the democracy. Emergency is like a black spot on the history of India's democracy, the Prime Minister said.

Indians are proud of its democracy and we can say that India is the mother of democracy.

Every village in India is now open-defecation free. We have provided electricity to every village in the country. Over 99 per cent houses have gas connection, every family is connected to the banking system. Now the poor have the benefit of free medical treatment of up to Rs 5 lakh.
Jun 26, 2022 18:27 (IST)
G7 Leaders Agree On Ban On Gold Exports From Russia

According to the White House, Russia accounted for about 5 per cent of all world gold exports in 2020 and 90 per cent of Russia's output went to G7 countries -- mostly to Britain.

"We have to stay together," US President Joe Biden told German Chancellor Olaf Scholz, the host of the three-day gathering.
Jun 26, 2022 17:41 (IST)
"Glimpses From Special Welcome In Munich": PM Modi Meets The Indian Community

Prime Minister Narendra Modi reached Munich today for the G7 Summit. Pictures of the Prime Minister's interaction with the Indian community in Munich were shared on twitter with the caption, "Glimpses from the special welcome in Munich."

Glimpses from the special welcome in Munich. pic.twitter.com/DITMr4TPYU

Hundreds of performers will be participating in the event and the Audi MDome will be embellished with the 'Vande Matram' song.
Jun 26, 2022 17:17 (IST)
Looking Forward To "Fruitful Discussions" With G7 Leaders: PM Modi

Prime Minister Narendra Modi arrived in Munich today to attend the G7 summit and said, " I look forward to fruitful discussions with world leaders during the [G7] Summit."

Landed in Munich to participate in the G-7 Summit. I look forward to fruitful discussions with world leaders during the Summit. pic.twitter.com/ahajucILW2

The Prime Minister is attending the summit to be held on June 26 and 27.