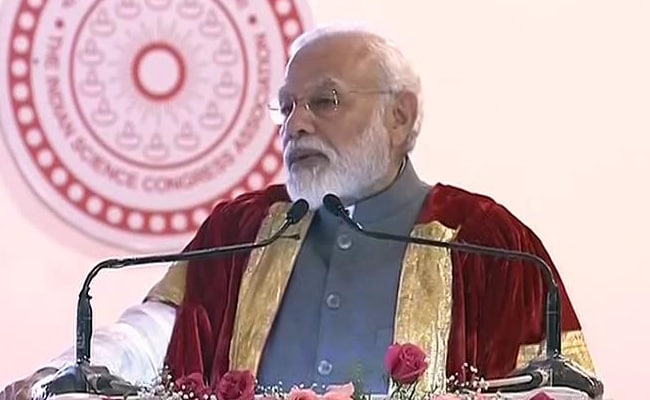 Prime Minister Narendra Modi, who had said last year that he wants to see India among top 50 countries on World Bank's ease of doing business ranking, today said that his government was making similar efforts to help scientists in the country by effectively using "information technology to reduce red tape" and ensure "ease of doing of science".

He also shared his motto for the young scientists in the country - "innovate, patent, produce and prosper". "These four steps will lead our country towards faster development," PM Modi said as he inaugurated the 107th edition of the Indian Science Congress in Bengaluru.

India needs "to explore, map and responsibly harness the vast oceanic resources of water, energy, food and minerals," PM Modi said as he stressed: "Our successes in space exploration should now be mirrored in the new frontier of the deep sea."

About 15,000 people are expected to attend the five-day event, including Nobel laureates Stefan Hell from Max Planck Institute Germany and Ada E Yonath, an expert in structural biology from Weizmann Institute of Science, Israel.

"I am happy to learn that India's ranking has improved in the Innovation Index to 52. Our programs have created more technology business incubators in the last five years than in the previous 50 years... I congratulate our scientists for these accomplishments," he added.

He also called upon the experts to find solutions to farmers issues, including stubble burning. "There is a need for revolution in technologies assisting agricultural practices. Can we find farmer-centric solutions to the problem of stalk burning for instance?" he asked.

He also mentioned his flagship 'Make in India' initiative at the event as he invoked Mahatma Gandhi. "Another important point I wish to make is the significance of "Make in India" in medical devices to bring the fruits of advances in diagnostics to our people. Mahatma Gandhi once said, 'It is health that is the real wealth and not pieces of gold and silver'," he said.

UP Police Alerted About Terror Threat Against Yogi Adityanath