The Prime Minister pointed out malnutrition as a big problem in the development of the country. 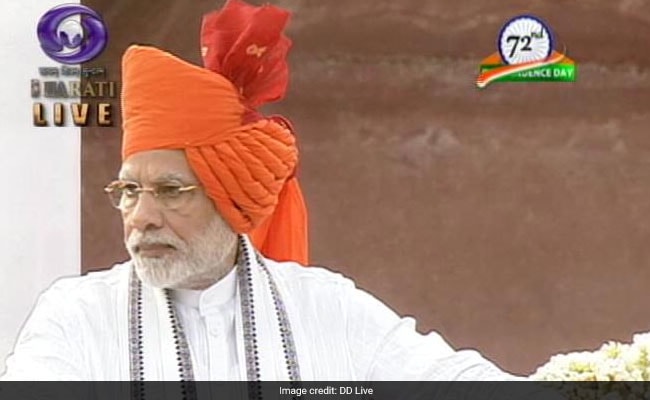 Prime Minister Narendra Modi on the 72nd Independence Day today, said the country was on a new trajectory of growth due to initiatives in the last four years of his government and asserted that he was impatient to take the country ahead of many others in the world.

Addressing the nation from the ramparts of the Red Fort, he took a dig at the previous UPA rule, saying if his government had continued with the same pace of development, the country would have taken decades to reach where it was today.

"Yes, I am impatient because many of the countries have moved forward. We have to move forward too. Malnutrition is a big problem in the country's development. I am anxious to eradicate it."

"I am impatient to provide health cover to every poor person so that they can fight diseases. I am anxious to provide quality life to all citizens. I am eager because we have to lead knowledge-based fourth industrial revolution. I am eager because I want that the country uses its resources and potential," he said.

Promising sanitation, housing, electricity, water, LPG, skills, health insurance and connectivity for all, Modi said towards the end of the speech that he wanted to create a new India for a better future.

"We have to make a new sunrise and take the country ahead of the skies and create a new India. We want to move ahead with the dream of reaching the crescendo of development. We want to progress more. There is no question of stopping or getting tired on the way," he said.

The Prime Minister said India was earlier seen among the fragile five nations but now it had turned itself into a "land of reform, perform and transform".

"We are all set for record economic growth. India''s voice is being heard effectively at the world stage. We are integral part of forums whose doors were earlier closed for us," he said.

"The demand for higher MSP (minimum support price for farmers) was pending for years. From farmers to political parties to agriculture experts, everybody was asking about it but nothing happened. The decision was taken by our government to provide the MSP of 1.5 times of production cost."

He said the armed forces veterans were demanding one rank, one pension but no one listened to them before the Bharatiya Janata Party came to power.

He talked about the Goods and Services Tax (GST), saying it had given new confidence to small and big traders who "wholeheartedly embraced" the new tax regime despite "initial problems".

"Who did not want the passage of the GST? Yet, it was pending for years. Last year it became a reality. The OROP demand was pending for decades. The people of India, our brave Army personnel had faith in us and we were able to take a decision on OROP."

"The country is now feeling the change. As a result, we are making highways with a double speed, houses are being made in villages with four times more pace, there is record production, we are manufacturing record mobiles. Today we are buying more aeroplanes.

"It is the same land, same sky, sea, government offices and the country. But in the last four years, India has moved with a new zeal and therefore today India is constructing twice the highways and producing record crops."