The NJAC Act, which sought to overturn the collegium system of appointing Supreme Court and High Court judges, was struck down by the top court in 2015. 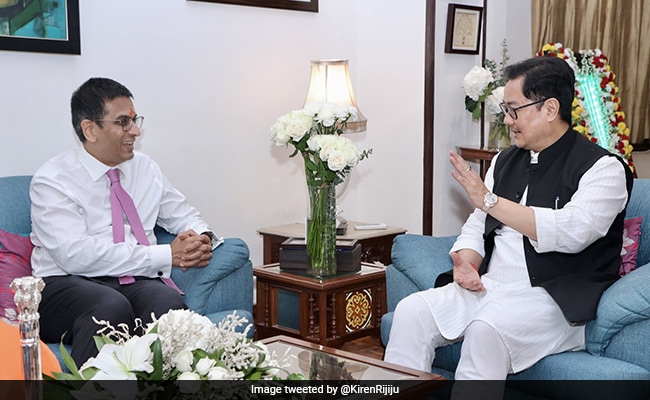 Kiren Rijiju had been attacking the Collegium system, describing it as "alien" to Constitution.(FILE)

Amid a tussle with the Supreme Court over the current system of appointment of judges, the Centre informed Parliament on Thursday that "at present, there is no such proposal" to reintroduce National Judicial Appointments Commission or NJAC, with suitable modifications.

The NJAC Act, which sought to overturn the collegium system of appointing Supreme Court and High Court judges, was struck down by the top court in 2015.

Responding to the written question of the Leader of Opposition in Rajya Sabha, Mallikarjun Kharge, and CPM's Rajya Sabha MP John Brittas, Union Law and Justice Minister Kiren Rijiju informed that "As on December 5, there is one proposal for the appointment of a Supreme Court Judge and eight proposals for the appointment of High Courts' judges recommended by the Collegium are pending with the Government."

Mr Rijiju had been attacking the collegium system, describing it as being "alien" to the Constitution.

The answer comes at a time when the Supreme Court has taken note of the delay in the appointment of judges by the Government on the judicial side and has issued notice to the Department of Justice secretary.

Hearing the case, a three-judge bench of the Supreme Court presided by Justice Sanjay Kishan Kaul in an order Thursday has said "We may in the end only say that the Scheme of our Constitution stipulates the Court to be the final arbiter about the position of law. The power to enact the law is with the Parliament. However, that is subject to scrutiny by the Courts. It is necessary that all follow the law as laid down by this Court as otherwise sections of society may decide to follow their own course even where law is laid down whether in the form of existing enactments by the Parliament or law laid down by the Court."