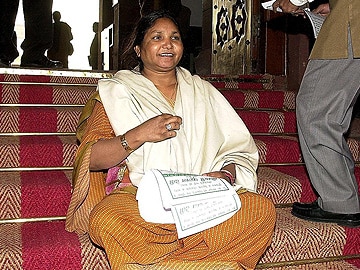 File pic: Phoolan Devi, a Samajwadi Party MP, was killed outside her home in 2001

Ms Devi was shot dead by three masked men outside her home in New Delhi in 2001.

Sher Singh Rana, the main accused, was the only one found guilty. 10 others were let off last week because of lack of evidence. "Why have you singled me out when everyone else has been let off?" Rana said in court.

Police said Rana, now 35, had confessed to murdering the 38-year-old politician to avenge the killing of 22 upper-caste men by Phoolan Devi and her gang in 1981, in what came to be known as the "Behmai massacre".

The massacre, according to Ms Devi, was in retaliation for her gang-rape by upper-caste men.

Rana was arrested in 2001 but had to be recaptured in 2006 after he made a daring escape while being transported to court from New Delhi's Tihar Jail by police escorts who turned out be fellow bandits in disguise.

Yesterday, he pleaded in court for leniency, saying he wanted to do something good for society. "You (judge) are sitting on the chair of God and what you say here comes directly from God's mouth," he told a city judge.

He said he is unmarried but has to look after his ailing mother. "My father died when I was in jail and I could not attend his last rites. My mother is ailing and she will get treatment only after I am released from jail," he pleaded in the jampacked courtroom.

Promoted
Listen to the latest songs, only on JioSaavn.com
The prosecution had sought the death penalty for him, calling him a threat to society.

38-year-old Phoolan Devi's life was captured in Bollywood director Shekhar Kapur's 1996 movie "Bandit Queen", which chronicled her transformation from abused child bride to outlaw to parliamentarian. She surrendered in 1983 and after being released from jail in 1994, she was elected as the Samajwadi Party MP from Mirzapur in Uttar Pradesh.