Read inOther Languages
This Article is From Dec 03, 2019 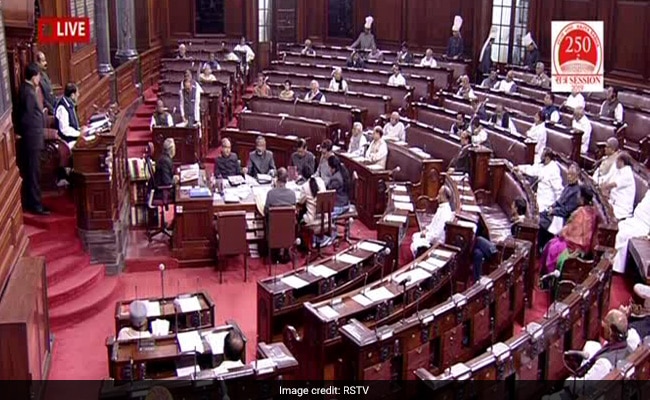 As the winter session of the parliament entered the third week, both houses of the parliament discussed the gang-rape and murder of the 26-year-old veterinarian near Hyderabad today. The woman, who was on her way from her house in Telangana's Shadnagar to a veterinary hospital where she worked, was stranded in Shamshabad after her two-wheeler reportedly suffered a puncture. Her body was found below an underbridge.

Finance Minister Nirmala Sitharaman also addressed the Parliament. Ms Sitharaman said the criticism that the government is not willing to listen is "absolutely unfair" and emphasised that she herself goes around the country and speaks to people.

Dec 03, 2019 01:32 (IST)
I have been called names in Parliament: Nirmala Sitharaman
"I have been called names in Parliament. If it is in anyone's DNA to ask questions and run away before answers are given, it is some other party and not our party. Each time we come to give replies instead of name-calling."
Dec 03, 2019 01:25 (IST)
Nirmala Sitharaman On Criticism Of Government
"We do take their criticism, many of them on my social media handle, call me names. I have no problems with that. They are affected. They feel that more needs to be done and therefore they voice their concerns"
Dec 02, 2019 16:25 (IST)
Mahua Moitra, MP, Trinamool Congress
If this bill was really to help everybody, especially MSME sector then the tax rate reduction should apply to all entities. It should not apply to just the companies, it should apply to LLPs, partnership firms & other non-corporate entities also.
Dec 02, 2019 16:25 (IST)
Mahua Moitra, MP, Trinamool Congress
The (corporate) tax cut that you have proposed only helps the profitable become more profitable. It does not do anything to revive a very large part of this economy which is struggling.

I Can Say PM Narendra Modi, Amit Shah Are Infiltrators: Why Congress Leader Adhir Ranjan Chowdhury Said This
Leader of Congress party in the Lok Sabha Adhir Ranjan Chowdhury on Sunday said that Prime Minister Narendra Modi and Home Minister Amit Shah were themselves ''infiltrators''." itemprop="description
Dec 02, 2019 13:58 (IST)
Leave it to the public to give judgement: Jaya Bachchan during Parliament Winter Session

Rajya Sabha MP Jaya Bachchan: If you have not been able to provide security then leave it to the public to give judgement. Those who failed to provide security and those who committed the crime should be exposed in public, & then let people decide. https://t.co/bYMvOB1Ulhpic.twitter.com/khx6Zf4OvJ

Sonal Mansingh, RS MP on Veterinarian's rape & murder: While I'm ashamed & shocked, I'm also disappointed that such incidents are reported from across country. Why there is govt, Police, civil society apathy? Each time there're candle marches & rallies then, why is it continuing? pic.twitter.com/pFP03oniSU

I don't have words to tell you how horrific these crimes are. Speaker, sir, should you permit, we can have a full discussion in the House and all suggestions given by everyone present here will be taken and a law can be formed if needed. Our govt is open to every suggestion anyone has to give to curb such heinous crimes. We are willing to do whatever it takes to ensure that the most stringent rules be implemented.

Defence Minister Rajnath Singh in Lok Sabha on rape & murder of woman veterinary doctor: This act has brought shame to the entire country. It has hurt everyone. The accused must be given the most stringent punishment for their crime. pic.twitter.com/5IMzVUlUY9

Finance Minister Nirmala Sitharaman in Lok Sabha on Punjab and Maharashtra Corporation bank scam: Nearly 78% of depositors of this bank are now allowed to withdraw their entire account balance. pic.twitter.com/RViOGaXUhs

Dec 02, 2019 12:07 (IST)
No mercy should be given to rapists: Venkaiah Naidu
Venkaiah Naidu called the incident a disgrace to society and value system. "We should see why such things are happening and we should look for remedial measures. I would want all of you to make suggestions. No mercy should be given to rapists. No new bill, but political will is required," he said
Dec 02, 2019 11:35 (IST)
Rajya Sabha MP Jaya Bachchan on the rape & murder of woman veterinary doctor in Telangana
I think it is time people now want the government to give a proper and a definite answer. These guys who commit such crimes, I know its bit harsh, but these kind of people should be brought out in public and lynched

Rajya Sabha MP Jaya Bachchan on rape & murder of woman veterinary doctor in Telangana: I think it is time the people now want the government to give a proper and a definite answer. pic.twitter.com/D87xUB2cSg

Dec 02, 2019 11:26 (IST)
AIADMK MP Vijila Sathyananth says the country is not safe for children and women. 4 people who committed this crime should be hanged till death before December 31. A fast track court should be set up. Justice delayed is justice denied.
Dec 02, 2019 11:22 (IST)
A social reformation takes place: Amee Yajnik

Congress' Amee Yajnik in Rajya Sabha, on rape & murder of woman veterinary doctor in Telangana: I request all the systems, judiciary, legislative, executive & other systems to come together to see that a social reformation takes place. This should be on emergency basis. pic.twitter.com/5q0b4ioILj

Dec 02, 2019 11:20 (IST)
Congress leader Ghulam Nabi Azad in Rajya Sabha on gang-rape and murder of veterinary doctor
"No government or leader would want that such incident occurs in their state, this problem can't be solved by just making laws. To eradicate such acts, there's a need that we take a stand together against such crimes," said Ghulam Nabi Azad.
Dec 02, 2019 11:17 (IST)
The issue of rape and murder of Telangana woman veterinarian raised in Lok Sabha
"Desh mein jo ghatnayein ghat rahi hain uspe Sansad bhi chintit hai. I have given permission for discussion on this after Question Hour," says Speaker Om Birla
Dec 02, 2019 11:02 (IST)
MP calls for discussion on rising onion, pulses prices in Rajya Sabha
Senior CPI leader in Rajya Sabha Binoy Viswam has demanded a discussion on the rising prices of onion and pulses in recent times. In his letter addressed to House Chairman M. Venkaiah Naidu, Mr Viswam said that it was a matter of great concern and urgency to the whole nation that there has been an exponential rise in the price of essential commodities such as onions and pulses that have made it difficult for the common citizen to survive. "With the reduction in purchasing power, the actual effect of the ongoing economic crisis is being felt in the daily food of the common person," Viswam said.