Parliament Monsoon Session Highlights: Both Lok Sabha and Rajya House started off on a stormy note today and were adjourned till 12 noon amid protests. 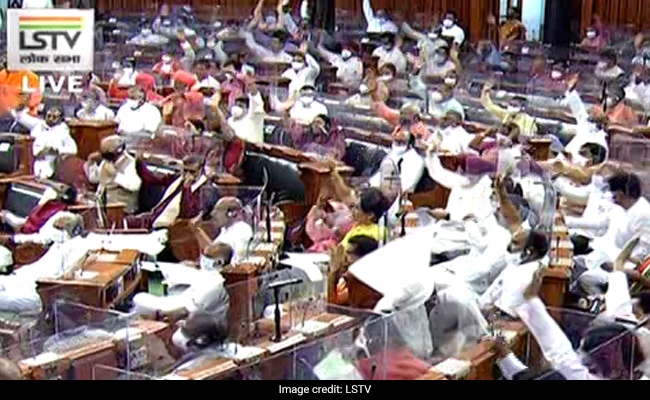 Monsoon Session 2021 Updates: Proceedings have been hit over the last few weeks due to protests.

The OBC Bill was passed in the Lok Sabha today amid multiple adjournments of both Houses. The Bill will allow states to draw up their own OBC list. Rajya Sabha proceedings were adjourned twice during the pre-lunch period amid continued uproar by opposition members.

Both Lok Sabha and Rajya House started off on a stormy note today and were adjourned till 12 noon amid protests. The proceedings have been hit over the last few weeks due to protests over the Pegasus snooping row, farm laws and other issues.

Members of the Congress, Trinamool and some other parties stormed the well carrying placards and started raising slogans in the Rajya Sabha. When the House met again at 12 PM, Deputy Chairman Harivansh started with the Question Hour even though opposition members trooped into the well and indulged in sloganeering.

The Question Hour continued despite the din by opposition members for around 30 minutes.

When the members raised their pitch amid continued slogan shouting, the Deputy Chairman adjourned the House till 2 PM and then later on till 4 pm.

The upper house has failed to transact any significant business due to the uproar created by opposition members, who are pressing for a discussion on the Pegasus snooping issue.

The Centre informed the Lok Sabha today that no decision has been taken to prepare National Register of Citizens (NRC) at the national level.

Here are the Highlights of the Monsoon Session of Parliament:

The Constitution (One Hundred and Twenty-Seventh Amendment) Bill, 2021 was passed by the House with 385 members voting in its favour and none against in the final division.

The opposition parties decided to "cooperate" with the government in passing the bill and suspend their protest in the House for the bill to be passed.

The opposition parties have been protesting and forcing adjournments since the beginning of the monsoon session over their demand for a probe into allegations of surveillance through Pegasus spyware and repeal of farm laws.

Replying to the debate on the bill, Social Justice and Empowerment Minister Virendra Kumar said the bill seeks to clarify that the state government and Union territories are empowered to prepare and maintain their own list of SEBCs.

The division took place through voting slips as the House has a special seating arrangement as part of precautions against COVID-19 and the automatic vote recorder could not be used.
ANI
Aug 10, 2021 20:44 (IST)

Repeat of September 2020, in Rajya Sabha today. ALL opposition parties call out Govt bluff. #FarmerProtests on the streets, MPs inside #Parliament

Govt running away from #Pegasus

Aug 10, 2021 14:52 (IST)
Rajya Sabha proceedings adjourned again amid opposition uproar, to meet at 3.03 PM.
Aug 10, 2021 14:42 (IST)
Rajya Sabha adjourned for 15 minutes
Rajya Sabha adjourned for 15 minutes as Opposition protest stalls debate on problems in  Agriculture sector
Aug 10, 2021 14:23 (IST)
Jairam Ramesh in Rajya Sabha: My Calling Attention Motion has been converted into a Short Duration Discussion, that too, on a general topic related to Agriculture. My Calling Attention was on repeal of 3 new farm laws and farmers agitation. Sense of the House has not been taken. This is not acceptable to me.
Aug 10, 2021 13:54 (IST)
Bills in Parliament today
The Lok Sabha has taken up the Constitution (One Hundred and Twenty-Seventh Amendment) Bill, 2021, according to news agency ANI.

The Rajya Sabha is likely to consider the following bills today: The General Insurance Business (Nationalisation) Amendment Bill, 2021; The Appropriation (No.4) Bill, 2021; and The Appropriation (No.3) Bill, 2021.
Aug 10, 2021 13:49 (IST)
Congress MP Deependra Hooda gives suspension of business notice on farmers' protest in Rajya Sabha
Congress MP Deependra Singh Hooda on Monday gave suspension of business notice in Rajya Sabha under rule 267 to hold a discussion on the plight of farmers and also the ''brave'' stand taken by them during the eight months of agitation at Delhi borders.

In his notice, Congress MP Hooda said that an extraordinary situation has been created over the passing of the Farm Bills by the Centre in September 2020.

"I hereby give notice under 267 of the rules of Procedure and Conduct of Business in the Council of States of our intention to move a motion to suspend the business of the house from 11 am on August 10 the motion read reads as follows- that the house to discuss the extraordinary situation that has risen arisen over the passing of the Farm Bills by the Government of India in September 2020," Mr Hooda said in his notice.

The Congress MP said that lakhs of farmers have been protesting at the borders of the national capital for almost eight months and have braved the winter, summer and are now out in the open during the monsoons.

"Farmer organisations say more than 500 people have lost their lives during the protests. As a democracy, our Parliament represents the will of our people, and as representatives of the people, it is our duty to raise their issues in the temple of democracy. I, therefore, urge you to suspend the business of the House so that the issue can be discussed in Rajya Sabha," he added.
ANI
Aug 10, 2021 13:10 (IST)
No Decision Yet On NRC At National Level: Government Tells Lok Sabha
The Government admits no decision has been taken to prepare National Register of Citizens (NRC) at national level. "Till now, the Government has not taken any decision to prepare National Register of Indian Citizens (NRIC) at the national level," siad MoS Home Nityanand Rai in a reply to a question in Lok Sabha.
Aug 10, 2021 13:06 (IST)

There is no proposal to release the caste data at this stage: MoS Home Nityanand Rai to Lok Sabha in a written reply on a question on Census 2021

Aug 10, 2021 12:30 (IST)
Parliament Update: Lok Sabha Takes Up Constitution (Amendment) Bill, 2021
The Lok Sabha has taken up The Constitution (One Hundred and Twenty-Seventh Amendment) Bill, 2021 for discussion and passing, according to news agency ANI.
Aug 10, 2021 12:29 (IST)
Forthcoming Census To Be First Digital Census Of India: Home Ministry In Lok Sabha
The forthcoming Census will be the first digital Census and there is a provision for self-enumeration, the Union Home Ministry informed the Lok Sabha, according to news agency ANI. It said a mobile app for collection of data and a Census portal for management and monitoring of various Census-related activities have been developed.
Aug 10, 2021 12:24 (IST)

Aug 10, 2021 12:09 (IST)
Rajya Sabha Chairman Says Ruckus In House Would Send Wrong Message To People
Rajya Sabha chairman Venkaiah Naidu has cautioned the members of the House that if the House is disrupted today also, when farmers plight is scheduled for discussion, a wrong message will go to the people.

During sloganeering soon after Zero Hour started, Mr Naidu said, "Today is the 16th sitting of the monsoon session of this august House. The House functioned at the rate of just one hour per day. Important subject of farmers' issue is scheduled for discussion today in the House. If the House is not allowed to function today also, a message will go out that this House has no concern for the plight of farmers who are the bread givers for our people."
Aug 10, 2021 11:29 (IST)
Parliament Update: Lok Sabha, Rajya Sabha Adjourned Till Noon Amid Protests
Both Lok Sabha and Rajya Sabha have been adjourned till 12 Noon amid protests by opposition, according to news agency ANI. In Rajya Sabha, the protest began after discussion on Pegasus snooping issue was not allowed. Visual from Lok Sabha showed Opposition MPs gathered at the Well of the House, raising slogans and placards.
Aug 10, 2021 10:44 (IST)
Congress MP Gives Suspension Notice In Rajya Sabha Over Rising Fuel Prices
Congress MP Ripun Bora has given a suspension of business notice in Rajya Sabha under rule 267 to discuss rising prices of fuel and other essential commodities including medicine, according to news agency ANI. He said the House should agree to discuss the issue today by suspending all the business listed for today. "The people of this country of all walks of life have been facing untold sufferings in their day-to-day life," his notice read.
Aug 10, 2021 10:11 (IST)