Parliament Monsoon Session Today Live Updates: Opposition members, including from the Congress and the Trinamool, started raising slogans and showing placards to attack the government on the snooping issue as soon as the House met for the day at 11 am.

The monsoon session, which usually starts in July, had begun in September last year.

Lok Sabha proceedings has been adjourned till Thursday after the Opposition created a ruckus over various issues, including the Pegasus snooping controversy.

Opposition members, including from the Congress and the Trinamool, started raising slogans and showing placards to attack the government on the snooping issue as soon as the House met for the day at 11 am. The proceedings lasted for barely five minutes.

One of the placards read that while people are suffering from unemployment, the government is busy with "jasoosi" (spying). The slogan was in Hindi.

Here are the updates of Parliament Monsoon Session 2021:

When there's need to work together & implementation has to be done by the states, at that time we never said that this state failed or that state didn't do this. I don't want to do politics but many states have 10-15 lakh doses of vaccines with them, I have data: Health Min in RS pic.twitter.com/IzZFQuPW6z

Uninformed comment is bad enough but when an attempt is made to deliberately produce a false narrative, it's an even more serious matter. Even one death of any Indian citizen on account of any cause, whether COVID or non-COVID related,is matter of regret: Union Min HS Puri, in RS pic.twitter.com/z1KdQDJoyv

BJD MPs and Leader of House in Rajya Sabha Piyush Goyal hold discussions regarding the proceedings of the House during #MonsoonSession of the Parliament. pic.twitter.com/TCXePUtQq8

Jul 20, 2021 14:23 (IST)
Tamil Nadu had polls for 234 assembly seats in a day. West Bengal with 294 assembly seats had polls in 8 phases. Infection rate was 2.3% before polls but after 8 phases, it rose to 33%. Kudos to our CM, it has again come down below 1.8% now: TMC MP Dr Santanu Sen in Rajya Sabha.
Jul 20, 2021 14:09 (IST)
I pay tribute to Covid warriors including doctors and paramedics. I salute people who helped others by running 'oxygen langer' in Delhi during second wave of COVID-19. I also want to salute plasma donors, who came out in support: Mallikarjun Kharge,Leader of Opposition in Rajya Sabha. 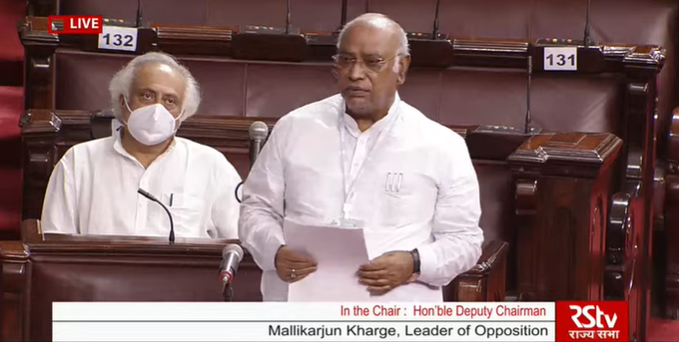 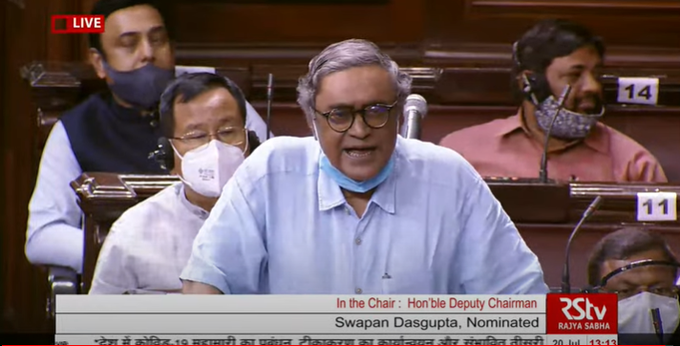 Jul 20, 2021 11:06 (IST)
Lok Sabha proceedings adjourned till 2 pm amid continuous disruption by opposition members.
Jul 20, 2021 11:04 (IST)
Parliament Schedule For Today
LOK SABHA
Bills for consideration and passing
RAJYA SABHA
Bills for consideration and passing
-The Marine Aids to Navigation Bill, 2021
Jul 20, 2021 10:59 (IST)
"Sad with what happened yesterday. The newly-appointed ministers could not be introduced because of Opposition ruckus (in Rajya Sabha). This forum is to put forth views in line with House decorum. I urge all MPs to let the House run smoothly," said Ajay Bhatt, Union Minister of State for Defence & Tourism.
Jul 20, 2021 10:47 (IST)
Four opposition parties - the Congress, the Trinamool Congress, Arvind Kejriwal's AAP, and the CPM - have given notices under rule 267 in Rajya Sabha demanding suspension of the scheduled business of the House to discuss the Pegasus spyware controversy.
Jul 20, 2021 10:42 (IST)
"We will raise this (Pegasus) issue... Nobody is obstructing nation's development, it's them (BJP) who have obstructed it. They have earned lakhs and crores of money by imposing cess, hiking fuel price, wasting money on projects," Leader of Opposition in Rajya Sabha, Mallikarjun Kharge said. 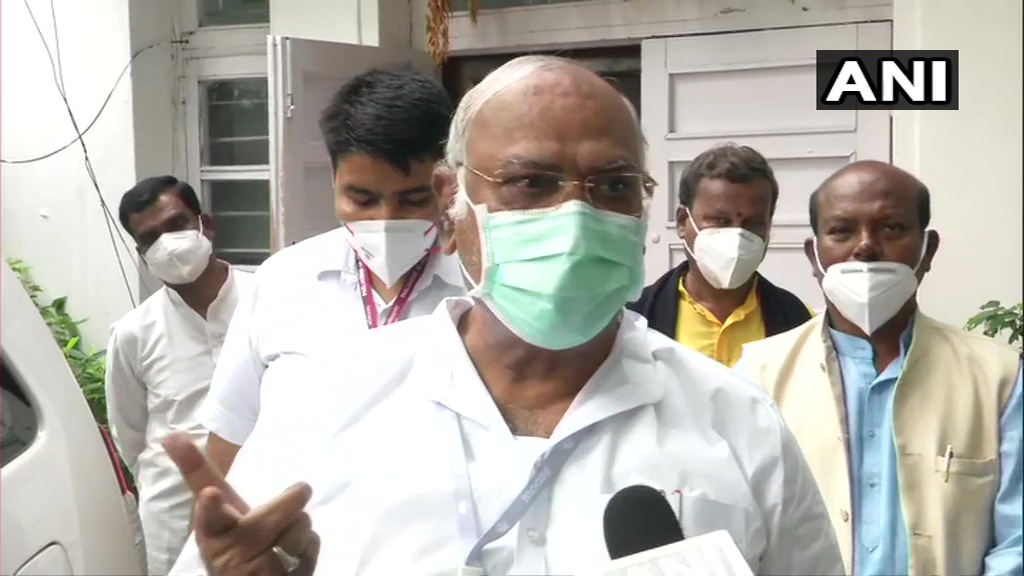 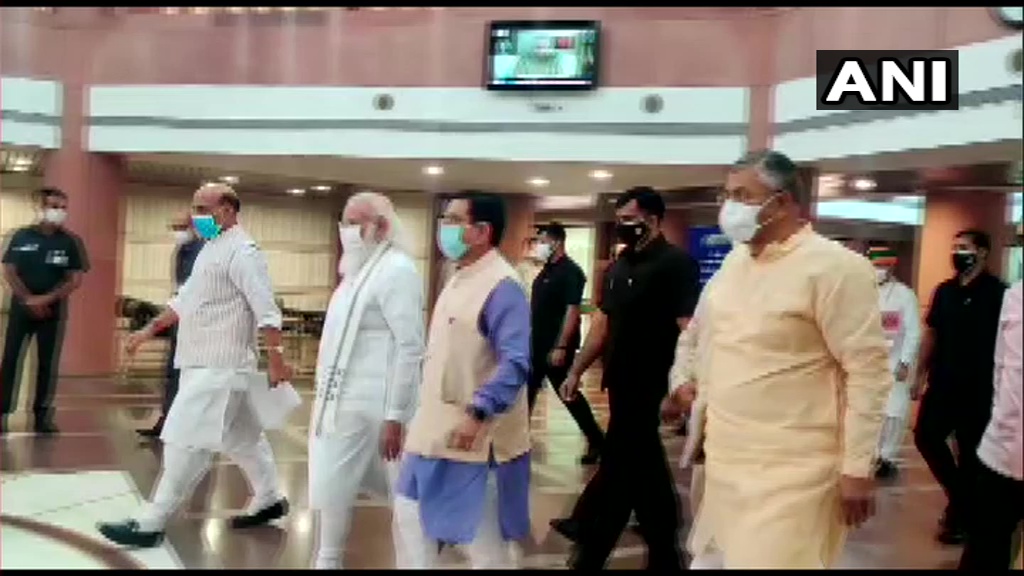 Jul 20, 2021 10:27 (IST)
Trinamool MPs To Stage Dharna Over Pegasus Snoopgate Issue
Trinamool MPs to stage dharna near Mahatma Gandhi statue in Parliament today at 10.30 am over Pegasus Snoopgate matter.
Jul 20, 2021 10:09 (IST)
Samajwadi Party leader Akhilesh Yadav said, "Listening to people's personal talk by spying on the phone is a gross violation of the 'right to privacy'. If BJP is getting this work done then it is punishable and if BJP government says that it is not aware of it then it is its failure on national security. Phone spying is a democratic crime."
Jul 20, 2021 10:04 (IST)
Congress MP Gaurav Gogoi has moved a motion of Adjournment of the business of the House to discuss over Pegasus issue.
Jul 20, 2021 09:53 (IST)
Congress Lok Sabha members to meet at CPP Office today at 10.30 am to chalk out the floor strategy on the issue of 'Pegasus Project' media reports.
Jul 20, 2021 09:53 (IST)
Electronics and Information Technology Minister Ashwini Vaishnaw to make a statement on 'Pegasus Project' issue in Rajya Sabha today.
Jul 20, 2021 09:51 (IST)
Congress MP KC Venugopal has given a notice under rule 267 in Rajya Sabha to suspend the business and discuss the alleged usage of Pegasus spyware by the Government.
Jul 20, 2021 09:42 (IST)
PM Modi and Union Home Minister Amit Shah arrive at the Parliament.

Delhi: PM Narendra Modi & Union Home Minister Amit Shah arrive at the Parliament on the second day of the #MonsoonSessionpic.twitter.com/oa6XfESG3T

Disruptors and obstructers will not be able to derail India's development trajectory through their conspiracies. Monsoon session will bear new fruits of progress.https://t.co/cS0MCxe8aO

Jul 20, 2021 08:55 (IST)
Slogans As PM Modi Speaks In Parliament, Government Hits Back
Prime Minister Narendra Modi on Monday could not introduce his new ministers to the house amid uproar by the opposition, as the monsoon session of parliament took off on a bitter note. Both houses were subsequently adjourned. Read Here
Jul 20, 2021 08:52 (IST)
Union Law Minister Kiren Rijiju said he felt sad that the Opposition did not allow him the opportunity to be introduced in Parliament.

But I'm sad. As the first Tribal to be Minister of Law and Justice of the country, I didn't get the opportunity to be introduced in the Parliament by Hon'ble PM as Congress and allies disrupted the introduction of Council of Ministers in which SC, ST, OBC & Women got a big place https://t.co/Utd2qNFsW2