The Congress accused that the BJP-led government scrapped a deal for 126 aircraft negotiated by the previous UPA government to go for an overpriced deal for 36 aircraft only to help Anil Ambani, whose inexperienced defence company bagged an offset contract with Dassault. 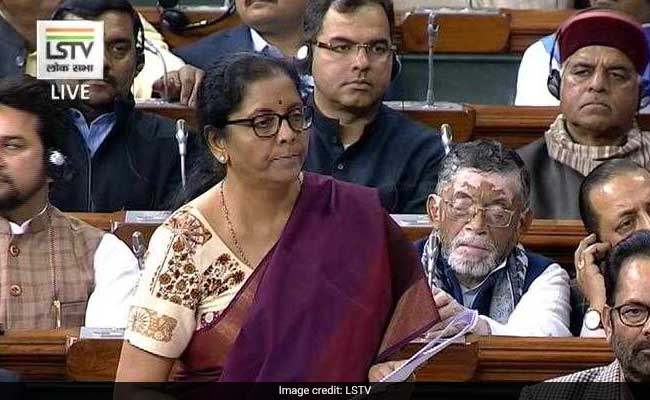 Defence Minister Nirmala Sitharaman today resorted to a point-by-point rebuttal of the Rafale deal in Lok Sabha countering the accusations of Congress. She accused the Congress of scrapping an earlier deal when it was in power because it "didn't get the money" and ignored social security in favour of its "treasury security".

The Congress accused that the BJP-led government scrapped a deal for 126 aircraft negotiated by the previous UPA government to go for an overpriced deal for 36 aircraft only to help Anil Ambani, whose inexperienced defence company bagged an offset contract with Dassault. Ms Sitharaman said the assumption that the Rafale fighters were available off the shelf was "mistaken", referring to the 126 aircraft deal. Eighteen of those jets were to be delivered in fly-away condition. She also that "Bofors was a scam, Rafale is not. It will bring PM Modi back to power."

Here are the LIVE Updates from the Parliament:

Jan 04, 2019 16:19 (IST)
Continuing with her reply, Nirmala Sitharaman says:
Jan 04, 2019 16:10 (IST)
Rahul Gandhi speaks in Parliament. In his reply to Defence Minister he says:
Jan 04, 2019 16:01 (IST)
"Bofors A Scam. Rafale Will Bring PM Modi Back", Says Nirmala Sitharaman
Jan 04, 2019 15:59 (IST)
She says, "National security considerations must be kept in mind.I have given point-by-point detail about pricing of basic aircraft."
Jan 04, 2019 15:46 (IST)
Nirmala Sitharaman detailed how their Rafale deal was better than Congress:
Jan 04, 2019 15:39 (IST)
She also says, "Despite what Supreme Court said, we have opposition parties saying we misled the court - this is unfair. We did not wait for Congress, we went ourselves to the SC to request a correction."
Jan 04, 2019 15:36 (IST)
Nirmala Sitharaman reading from judgment, paragraph 25 says, "The material placed before us shows that govt has not disclosed pricing details other than than basic aircraft. Revealing the pricing details could hurt national security, and contract between two countries."
Jan 04, 2019 15:24 (IST)
"No bank guarantee was provided or is being provided for any foreign military sales contracts signed between India and US. No bank guarantee was provided during a deal with Russia when Mulayam Singh was Defence Minister," says Defence Minister Nirmala Sitharaman.
Jan 04, 2019 15:15 (IST)
"Did they (opposition) sit down with the defence minister to find out pricing of the aircraft? Rs 670 crore has already been disclosed in the Parliament as the basic price. There is no record of the Rs 526 crore they quote," defence minister Nirmala Sitharaman says.
"Comparing the price of a basic aircraft with a weaponized aircraft is like comparing apples and oranges," she adds.
Jan 04, 2019 15:04 (IST)
"Are they (opposition) so irresponsible that they go to Pakistan for help? A Congress leader (without naming him/her) went to Pakistan and asked them for help in removing the BJP/PM Modi government from power in India," says defence minister.
Jan 04, 2019 14:58 (IST)
Defence Minister Nirmala Sitharaman in Lok Sabha on Rafale deal:
"This entire campaign has been on falsehoods and irresponsible allegations. I will ask a few questions now."
"We were told by Congress spokesperson that we shall not be talking on Rafale, because its an internal matter. On March 9, before Rahul Gandhi met French President Macron, Congress spokesperson told the media: Congress will not discuss India's defence deals with a foreign head of state. This is internal matter. This discussion the government has to do with France, not us."
"However, On July 20 in the Parliament, Rahul Gandhi says: 'I asked the french President about the secrecy pact but he denied the existence of such a pact. He said he has no issues in making the cost public.' Who is truthful here? The Congress spokesperson or Rahul Gandhi?"
The Congress is building the whole thing on falsehoods, she adds.
Jan 04, 2019 14:45 (IST)
"When Rahul Gandhi held a meeting near HAL Bengaluru, he said 'Rafale is your right. You should have produced it.' "Congress is only shedding crocodile tears on the HAL not getting the offset contract as it did nothing to scale up the capacity of the state-run firm. The BJP-led NDA government gave Rs 1 lakh crore worth of contracts to HAL," says defence minister in Lok Sabha.
The minister says, "You stopped the deal, forgetting Air Force was suffering. You didn't conclude the deal, because it didn't suit you. The deal didn't get you money."
Jan 04, 2019 14:37 (IST)
Defence Minister Nirmala Sitharaman in Lok Sabha on Rafale deal:
"The Congress did not intend buying the jets . For every 'AA' there is a 'Q' and 'RV'."
"There was no agreement between Dassault and HAL. Dassault was told that HAL will need 2.7 more man hours for the same Rafale jet than to produce one in France. Dassault also told they will not stand guarantee for the jets produced in India. Therefore, the deal with HAL was not struck."
"HAL capacity has been increased from eight to 16 aircraft per year."
"You (opposition) are misleading the country. We are getting 36 aircraft (two squadrons) in fly away condition as compared to your 18."
Jan 04, 2019 14:22 (IST)
Defence Minister in Lok Sabha says: "The first aircraft will be delivered in September 2019 and 36 aircraft will be delivered in the year 2022. The process of negotiation was finished in 14 months."
"There is a difference between defence dealings and dealing in defence. We deal in defence with national security as a priority," she adds. 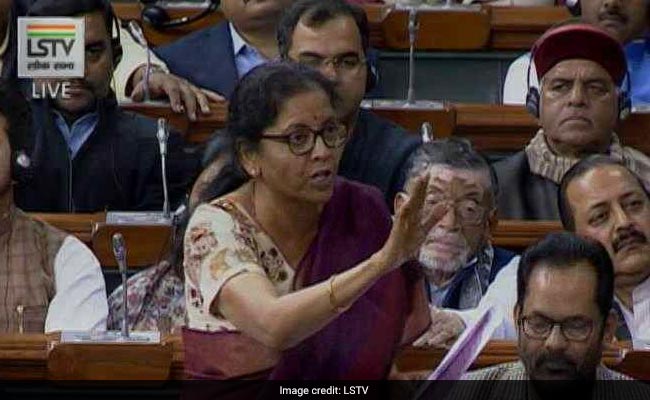 Jan 04, 2019 14:19 (IST)
"China and Pakistan are building a bigger fleet. The UPA government wanted only 18 flyaway fighter jets. The UPA created a deadlock," says Defence Minister Nirmala Sitharaman in Lok Sabha on Rafale deal.
Jan 04, 2019 14:11 (IST)
"Senior members of the Opposition don't want to hear my answers. It is very disheartening. This country needs to know that defence purchases are national security related," says Defence Minister Nirmala Sitharaman in Lok Sabha on Rafale deal.
Jan 04, 2019 14:10 (IST)
"This country will have to understand that national security is important, whether they (opposition) are in power or we are (BJP). We cannot run away from facts," says Defence Minister Nirmala Sitharaman in Lok Sabha on Rafale deal.
"The environment around India is very volatile. It is important for us to understand that whosoever is in power, will want peace. But it cannot be at the cost of making our armed forces feel that they are not being given enough to fight," she adds.
"Timely getting the equipment should be the priority. Our two borders are always highly sensitive and it is important to timely purchase the ammunition. We have had wars in northern and western frontiers. We have to recognise the sense of urgency."
Jan 04, 2019 13:38 (IST)
The suspension of 45 Lok Sabha members belonging to AIADMK and the TDP is likely to be revoked if they assure Speaker Sumitra Mahajan that they will not create pandemonium.
Deputy Speaker M Thambidurai, of AIADMK, urged the Speaker to revoke the suspension of all the 45 members of his party and the TDP. "You have all the rights if members violate the rules. You have already punished them. I would humbly request you to kindly allow them to take part in the proceedings from Monday onwards. Kindly revoke their suspension," he said.
Jan 04, 2019 13:36 (IST)
BJP legislator Anurag Thakur cites National Herald case and Agusta Westland case after Congress asks the ruling party to answer on Rafale deal issues.
Jan 04, 2019 13:19 (IST)
Journalist Smita Prakash interviewed PM Modi for more than hour and she was criticised by a politician (Congress president Rahul Gandhi), says BJP leader Anurag Singh Thakur.
"Maybe this politician has never heard a woman ask such questions. They must have expected her to ask PM Modi about what he ate and how are his relations with his mother. But PM Modi was asked all important questions and he gave all the answers," he adds.
"He (Rahul Gandhi) was so confused (during a press conference), that he spoke for 20 minutes and told 20 lies."
Jan 04, 2019 13:07 (IST)
Congress leader Mallikarjun Kharge says Prime Minister Narendra Modi should come in the parliament and clarify on the issue of Rafale fighter jet deal.
Jan 04, 2019 13:03 (IST)
Congress leader Mallikarjun Kharge, during a debate on Rafale fighter jet deal in Lok Sabha, says: "The affidavit submitted by the Centre before the Supreme Court is wrong. Centre misguided the court and the public. This is the reason we are demanding a joint parliamentary committee."
Jan 04, 2019 12:41 (IST)
Female lawmakers in Rajya Sabha, cutting across party lines, ask the BJP-led government to use its brute majority in Lok Sabha to ensure passage of a legislation providing 33 per cent reservation to women in Parliament and state legislatures.
The Constitution (108th Amendment) Bill, commonly known as the Women's Reservation Bill, was passed by Rajya Sabha in 2010, but is awaiting nod of Lok Sabha.
Jan 04, 2019 12:33 (IST)
BJP lawmaker Meenakshi Lekhi, in the Lok Sabha, says the Kerala government is not maintaining law and order in the state and transporting women in ambulances to Sabarimala.
Jan 04, 2019 12:21 (IST)
On Sabarimala Temple issue in Lok Sabha, Congress legislator KC Venugopal tells news agency ANI: "We want peace in the state. We want a solution. Otherwise, the govt is promoting violence in the state."
Jan 04, 2019 11:58 (IST)
Congress lawmakers protest in Parliament premises, selling potatoes to raise issues concerning Punjab farmers.