The Rajya Sabha and Lok Sabha were adjourned for the day following uproar by Opposition parties over the violence in the national capital, with members alleging government inaction to the riot.

The Congress is likely to submit adjournment motion notices in both Houses of Parliament today. (FILE)

The Congress MPs raised the issue of volence in Delhi and demanded Home Minister Amit Shah's resignation over alleged police lapses. The Rajya Sabha and Lok Sabha were adjourned for the day following uproar by Opposition parties over the violence in the national capital, with members alleging government inaction to the riot.

Here are the Highlights of Parliament Budget Session:

Mar 02, 2020 16:24 (IST)
Bill For Extending Upper Limit Of Abortion To 24 Weeks Introduced In Lok Sabha
A bill that seeks to extend the upper limit for permitting abortions from the present 20 weeks to 24 weeks was introduced in Lok Sabha on Monday.

Health Minister Harsh Vardhan introduced the Medical Termination of Pregnancy (Amendment) Bill, 2020 amid vehement protests by opposition members against the Central government over the Delhi violence which has left more than 40 persons dead.
PTI

Mar 02, 2020 15:57 (IST)
Rajya Sabha Adjourned For Day
The Rajya Sabha was adjourned for the day on Monday following uproar by Opposition parties over the violence in the national capital, with members accusing the government of sleeping while Delhi burnt.

As the Upper House re-assembled at 2 pm after an adjournment earlier in the day, Opposition MPs including those belonging to the Congress, AAP, Left, TMC, SP, BSP and DMK were up on their feet shouting slogans and accusing the government of failing in its duty.

Deputy Chairman Harivansh, who was conducting proceedings, made repeated appeals to protesting members standing in the Well to return to their seats so that the House could function normally.
PTI
Mar 02, 2020 15:55 (IST)
Congress MP Alleges Physical Assault By BJP MP
Congress MP Ramya Haridas has written to Lok Sabha Speaker Om Birla alleging physical assault by BJP MP Jaskaur Meena inside Lok Sabha today: ANI
Mar 02, 2020 11:50 (IST)
Lok Sabha adjourned till 2 pm as a mark of respect to JD(U) MP from Bihar, Baidyanath Prasad Mahto, who died recently. (ANI)
Mar 02, 2020 11:38 (IST)
Congress, Trinamool and AAP MPs staged separate protests near the Gandhi statue in Parliament demanding answers from the government on the Delhi violence on the first day of the second half of the budget session. At least 46 people died and more than 300 were injured during the violence in northeast Delhi. 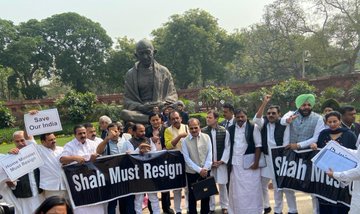 Mar 02, 2020 11:32 (IST)
Rajya Sabha Adjourned Till 2 pm Over Delhi Violence Issue
Rajya Sabha proceedings adjourned till 2 pm after the entire opposition protests over issue of violence in Delhi.
Mar 02, 2020 11:21 (IST)
In Rajya Sabha three bills are scheduled to be passed today- The Central Sanskrit Universities Bill, The National Commission for Indian System of Medicine Bill, The National Commission for Homoeopathy Bill.
Mar 02, 2020 11:19 (IST)
Many bills will be introduced in the Lok Sabha today. The The Medical Termination of Pregnancy (Amendment) Bill, 2020, The Mineral Laws (Amendment) Bill, 2020- these two bills will be introduced today. The Direct Tax Vivad Se Vishwas Bill, 2020, The Aircraft (Amendment) Bill, 2020 are to be passed in the Lok Sabha today.
Mar 02, 2020 10:35 (IST)
Congress leader in Lok Sabha Adhir Ranjan Chowdhury gave notice to Speaker Om Birla to suspend all business in the House to discuss the violence in Delhi. (IANS)
Mar 02, 2020 09:33 (IST)
Along with Congress many other parties like Trinamool Congress, Communist Party of India, Nationalist Congress Party, Dravida Munnetra Kazhagam have given Adjournment Motion Notice in Lok Sabha over the recent northeast Delhi violence.
Mar 02, 2020 09:11 (IST)
Congress leaders Adhir Ranjan Chowdhury and K Suresh have given Adjournment Motion Notice in Lok Sabha over Delhi Violence. Mr Suresh also commented on Union Minister Anurag Thakur's inflammatory speech during the assembly elections in Delhi and said that whatever he has said is on records and he cannot go back on his statements now.
Amit shahParliament sessionAmit Shah's resignation