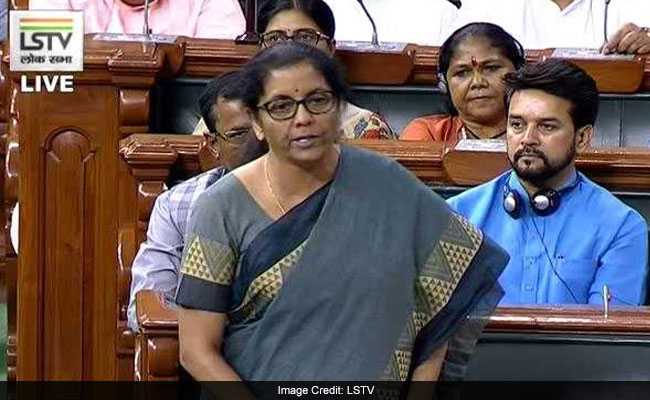 Finance Minister Nirmala Sitharaman addressed the parliament this afternoon days after presenting the Union  Budget for this fiscal year.  "There has been a lot of interest in the Budget 2019," Ms Sitharaman said as she began her address.

"There has been constant effort to empower states," she said elaborating further and highlighted that this is the "second budget since the implementation of Goods and Services Tax".

The budget was criticized by the opposition parties for failing to provide relief to the farmers.

Here are the updates of parliament session:

Jul 10, 2019 15:00 (IST)
"There has been an increase of over Rs 80,000 crore from last financial year, and more than 2 lakh crore over the Budget of 2017-18. This shows the serious intent of the government towards a stronger economy and the country's development": Nirmala Sitharaman in parliament
Jul 10, 2019 15:00 (IST)
Days after she presented the union budget in parliament, Finance Minister today addressed the parliament.
Jul 10, 2019 14:41 (IST)
Speaking in the Lok Sabha, Railways Minister Piyush Goyal said "there is no proposal to private railways", news agency PTI reported. Read here.
Jul 10, 2019 14:40 (IST)
Rajya Sabha was adjourned till 3 pm after uproar by Congress MPs over recent political developments in Karnataka, news agency ANI reported.
Jul 10, 2019 13:44 (IST)
Let Us Not Put Democracy In Danger: Venkaiah Naidu To Rajya Sabha Members
At the start of proceedings, Rajya Sabha Chairman Venkaiah Naidu said he has not admitted notices by Congress members including Kapil Sibal under rule 267 seeking suspension of rules to take up their issue, news agency PTI reported. "Let us not put democracy in danger," he told agitated Congress members. As they continued to protest, he said, "You don't want to allow democracy to function here?" This prompted members to take their seat and the House took up Zero Hour where submissions of urgent public important are taken up.
Jul 10, 2019 13:42 (IST)
Opposition Congress members today again disrupted proceedings in Rajya Sabha over the
Karnataka crisis and accused the BJP of trying to destabilise the party's coalition government in the state, news agency PTI reported. The upper house of the parliament had witnessed uproar over the Karnataka issue on Tuesday also. The House was adjourned soon after the ruckus started.