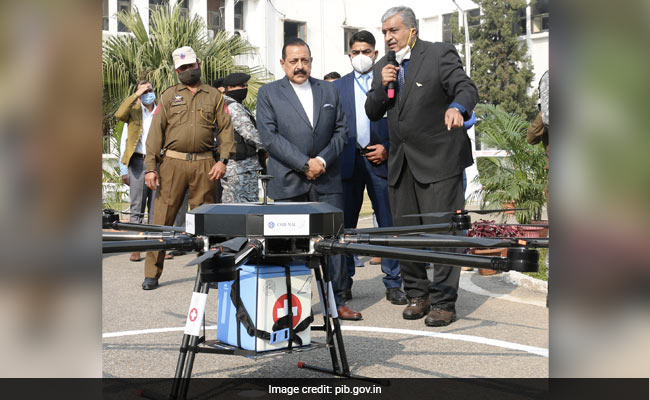 The Indian drone has carried to the border, the message of protecting lives, said a statement. (File)

Union Minister for Science and Technology Jitendra Singh said that while Pakistan's drones carry explosives to spread terror and threaten human lives, the Indian drones have assumed the role of a COVID warrior and are carrying life-saving vaccines and medicines.

This indeed is the fundamental difference between the two countries, he added.

Mr Singh was speaking while launching the first-of-its-kind drone driven aerial delivery facility to transport COVID-19 vaccines as well as emergency medicines to inaccessible and difficult areas in a short span of time, said a press release by the Ministry of Science and Technology.

Referring to the first consignment of 50 vials of COVID-19 vaccines which were dropped by the drone near the International Border (IB) in Marh area, Mr Singh added, the "Octacopter" drone which was developed indigenously at Bengaluru at the initiative of the Council of Scientific and Industrial Research (CSIR) under the Ministry of Science and Technology, is truly a messenger of peace, while Pakistan is using the drone to disrupt peace, according to the press release.

The Indian drone has carried to the international border, the message of protecting lives from COVID and, ensuring the health and well being of everybody, as per the press statement.

Under Prime Minister Narendra Modi, Mr Singh added, India's vaccination drive has turned into a mass campaign and every citizen is trying to make an appropriate contribution to it, the statement said.

"We, in the Ministry of Science and Technology, also decided to join Prime Minister Modi's 'Har Ghar Dastak' campaign by developing a drone which would reach households in far-flung and difficulty areas which lack means of transport and thus the drone would perform the function of knocking at the door of every home to ensure that not a single person remains without vaccination," he added.

He said, India has administered over 120 crore doses of Covid-19 vaccines so far, but there is a need for adopting unconventional methods to vaccinate 65 per cent population living in rural and remote inaccessible hilly areas.

The minister informed that the Octacopter can carry a payload of 10 kg with a range of 20 km and fly at an operational altitude of 500 meters AGL at a maximum flying speed of 36 kmph.

Referring to the recent monthly radio programme 'Mann ki Baat', where PM Modi said, "One of the things that is capturing people's imagination is the usage of drones in India", Mr Singh informed that more such live demonstrations will be carried out by CSIR in actual remote inaccessible hilly areas like Kishtwar, Rajouri, Poonch and Bhadarwah.

He said, for instance, by road, medicines to reach remote PHC Sunat thawa from Bhaderwah healthcare center takes around 3 hours to cover 74 km, but by drone, it can be delivered within 15 minutes, which will be a boon for the rural people.

Mr Singh said that CSIR-National Aerospace Laboratories (CSIR-NAL) has come up with Octacopter drones to deliver medical supplies which will help in better resource management of limited supplies and facilitate just-in-time delivery to the current supply chain system.

The smart inventory management of stocks can help to ease the current burden as well as deal with the shortage crises of vaccines and medicine supply to remote locations, he added.

The minister said that the Octacopter has compliance to DGCA-NPNT, Geo fencing and digital sky with 360-degree Collision avoidance making it one of the best UAVs of its class.

He added that the Octacopter can be used for a variety of BVLOS (Beyond Visual Line of Sight) applications for last-mile delivery of medicines, vaccines, food, postal packets, Human organs etc.

The Union Ministry of Civil Aviation has granted conditional permission to CSIR-NAL for conducting BVLOS flight trials on September 13.