"Padmaavat" Controversy: The row intensified on Wednesday, a day before the film's release despite the orders of the Supreme Court declared that the states have no option but to maintain law and order. 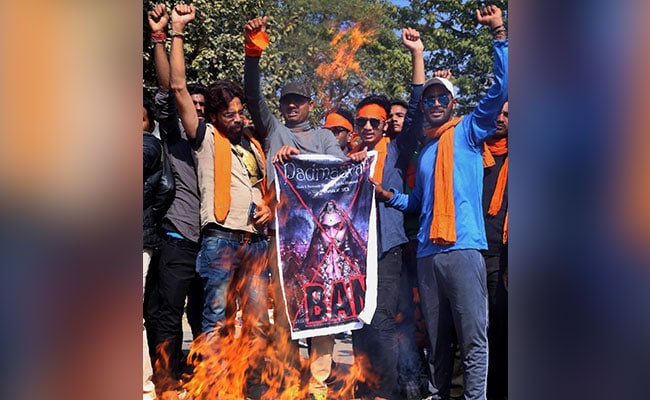 Padmaavat Row: The film has been facing protests by Karni Sena and several other fringe groups.

Violent protests against Sanjay Leela Bhansali's "Padmaavat" intensified on Wednesday as hundreds of supporters of fringe groups like the Karni Sena ran amok across several states. Security in several states was bolstered today as the controversial movie released.

On Wednesday, vandalism was reported in Delhi, Haryana, Rajasthan, Uttar Pradesh, Madhya Pradesh and Jammu and Kashmir. In Gurgaon, adjacent to the national capital, around 20-25 students of a leading Gurgaon school had a narrow escape when a frenzied mob attacked a school bus. Protesters also burnt other buses and blocked roads. Karni Sena chief Lokendra Singh Kalvi said the organisation won't allow the release of the film and said "January 25 may come and go but we won't let the film release, come what may." Several schools, in the wake of violence, decided to stay shut. The Multiplex Association of India, representing about 75 percent of the multiplex owners, said the movie will not be screened in Rajasthan, Madhya Pradesh, Gujarat and Goa.

The movie has been at the centre of protests since the shooting for the movie began, with Rajput groups alleging the film distorted history and tarnished the image of the legendary Queen of Chittor by suggesting a romance between her and Alauddin Khilji, the Delhi Sultan said to be obsessed with her. Queen Padmini, who was said to have immolated herself to escape falling into the clutches of the invading forces of Alauddin Khilji, is looked upon as an icon by the Rajput community.

Here are the highlights on the controversy surrounding the film:

Jan 26, 2018 00:00 (IST)
Over 100 people belonging to different outfits were today arrested while participating in protests against the film "Padmaavat" in some major cities of Chhattisgarh, police said, according to news agency PTI.
Jan 25, 2018 23:57 (IST)
A top Haryana police official said on Thursday that the film "Padmaavat" was screened in cinema halls across the state without any interruption, news agency IANS reported.
"Adequate security arrangements were made and no untoward incident took place in any part of the state," Haryana Director General of Police (DGP) B.S. Sandhu said.
Jan 25, 2018 20:55 (IST)
Undeterred by Wednesday's violence by fringe groups, filmgoers in Gurgaon watched Sanjay Leela Bhansali's period drama "Padmaavat" on its opening day today even as the police made elaborate arrangements to ensure there was no mischief, news agency PTI reported. A majority of the over 40 multiplexes and theatres exhibited the Bollywood flick and the situation was peaceful, a police official said.
Jan 25, 2018 20:51 (IST)
District primary education officer Kishor Jani today said that schools will organise several cultural programmes on Republic Day. "The schools have been told not to include programmes based on songs and scenes of this film during cultural events to be held on January 26," Mr Jani was quoted as saying by PTI. "It is a positive step to avoid any controversy."
Jan 25, 2018 19:36 (IST)
Ex-Haryana Minister Suraj Pal Amu was taken into preventive custody, day after violence over "Padmaavat" was reported in Gurugram.  "He (Suraj Pal Amu) has been taken under preventive custody. He will be produced or action will be taken accordingly: Kuldeep Singh, DCP East Gurugram, was quoted as saying by news agency ANI.
Jan 25, 2018 19:19 (IST)
In Varanasi, a man attempted self-immolation in front of a mall in the Sigra area here to protest the screening of Sanjay Leela Bhansali's controversial film "Padmaavat" police said, according to news agency PTI.
Jan 25, 2018 17:39 (IST)
In Bengaluru, the screening of the movie was delayed to the statewide shutdown over Mahadayi dispute, news agency IANS reported. Read more about the Karnataka bandh here.
Jan 25, 2018 17:36 (IST)
In Mumbai, theatres in the country's entertainment capital were well-guarded by the Mumbai Police for the release of Sanjay Leela Bhansali's controversial drama "Padmaavat" on Thursday, according to news agency IANS.
Jan 25, 2018 17:33 (IST)
Amid security concerns being raised by the theatre owners in Madhya Pradesh, "Padmaavat" was not released in Madhya Pradesh on Thursday., news agency IANS reported. Cinema hall owners held talks with Chief Minister Shivraj Singh Chouhan and are hoping for a solution to the impasse.
Madhya Pradesh government spokesperson Narottam Mishra said the government's stance is very clear, and it is not ready for release of the film. The government will file a review petition in the Supreme Court.
Jan 25, 2018 14:08 (IST)
Uttar Pradesh Chief Minister Yogi Adityanath has asked all police chiefs of the state to ensure peaceful screening of Padmavaat and respond strictly to "anyone trying to disturb the peace". Uttar Pradesh had earlier refused to screen the film.
Jan 25, 2018 13:47 (IST)
Additional Director General of Police (ADGP) law and order of Haryana, Mohammad Akil says, "I appeal to everyone to maintain law and order. We would like to warn that if anybody takes law in their hands, it will be dealt strictly. Our senior officers are all on the road and all necessary security arrangements have been made."
Jan 25, 2018 13:27 (IST)
Clashes have also broken out between Police and Bajrang Dal workers outside a cinema hall in Rishikesh, according to ANI reports. 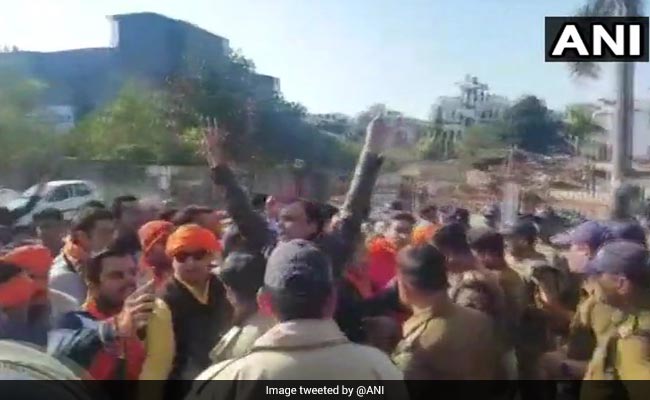 Jan 25, 2018 13:20 (IST)
Delhi Chief Minister Arvind Kejriwal talking about the mob that attacked a school bus says,"Yesterday some people pelted stones on school children in Gurugram. I couldn't sleep entire night. If our children are pelted with stones on Republic Day eve, a few kilometers away from nation's capital, it is a matter of shame for the entire nation." Jan 25, 2018 12:56 (IST)
Tension was palpable across cinema halls in Uttar Pradesh where members of the fringe group Karni Sena protest against Padmaavat at Lucknow's Novelty Cinema. The members of the group appeal to the people to not watch the film. One of the protester says," We will also compensate the money of the tickets in case people have already bought them." 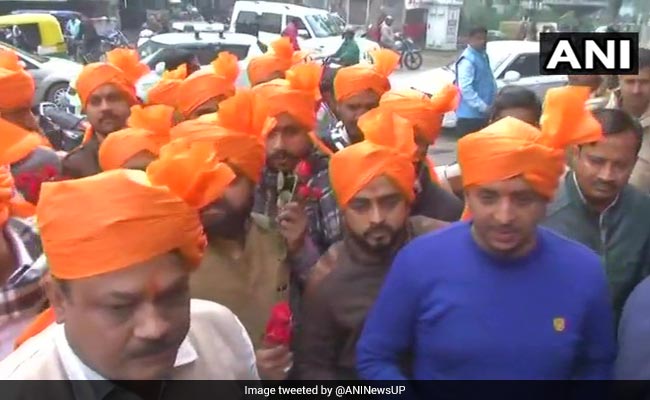 Jan 25, 2018 12:46 (IST)
A man trying to immolate himself outside a cinema hall in Varanasi has been detained.
Jan 25, 2018 12:42 (IST)
All-India Majlis-e-Ittehadul Muslimeen Chief and MP Asaduddin Owaisi says,"This is nothing but 'pakoda' politics practiced by BJP. Prime Minister and his party have meekly surrendered before these people who are protesting. He has 56 inch chest only for Muslims." 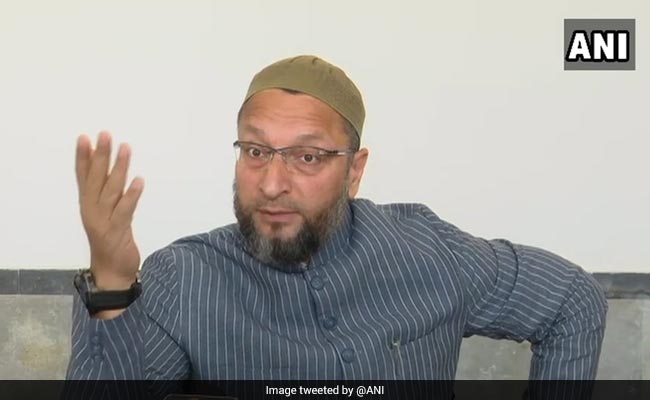 Jan 25, 2018 12:37 (IST)
Haryana minister Ram Bilas Sharma says that, "This is definitely a matter of worry. I am sure there will be a solution to this whole issue. We did not see this incident happening. The Chief Minister is looking into the whole issue."
Jan 25, 2018 12:33 (IST)
18 people have been arrested in connection with attack on school bus in Gurgaon during anti-Padmaavat protests yesterday according to ANI reports. They will be brought to Sohna Court today. The school bus carrying little children was attacked by a mob.
Jan 25, 2018 12:00 (IST)
In Udaipur, shops have been vandalized in protest against Padmaavat. 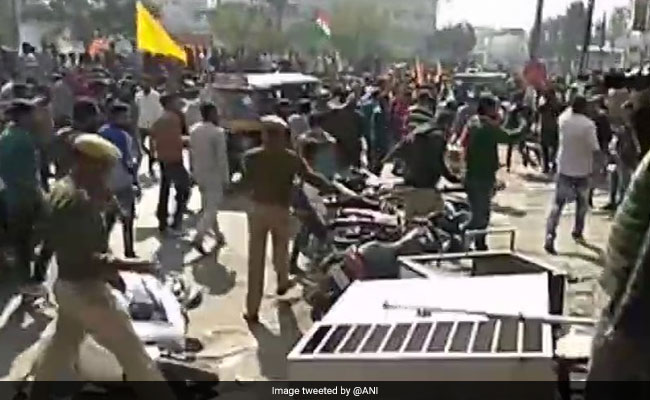 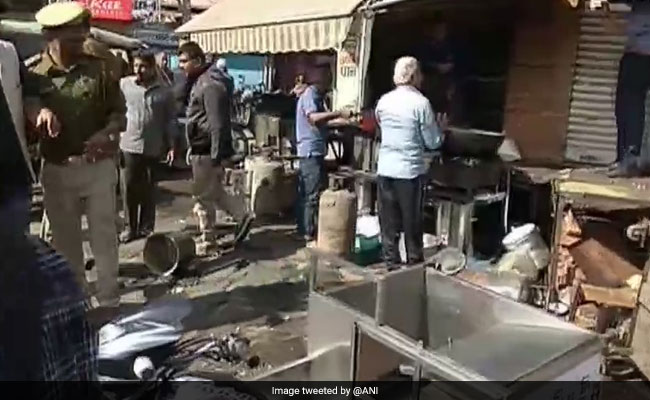 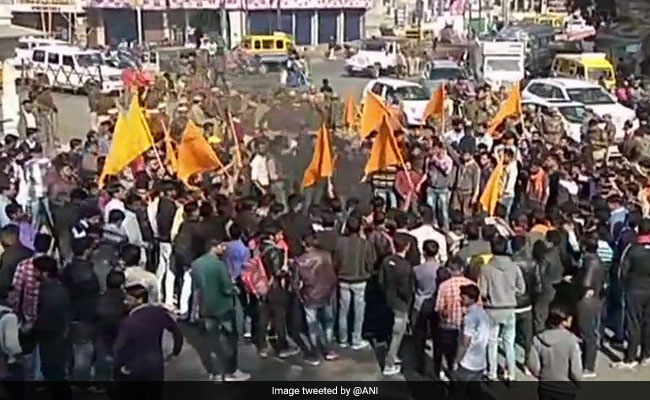 Jan 25, 2018 11:58 (IST)
Protesters brandish swords, burn tires in protest against Padmaavat in Muzaffarpur in Bihar. Protests have escalated this week with hundreds of demonstrators rampaging through the streets in protests. 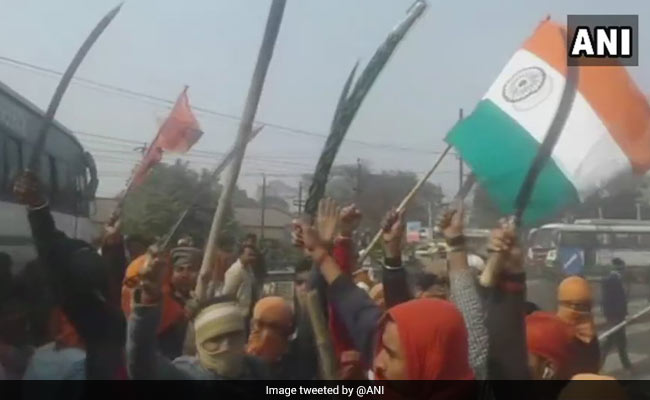 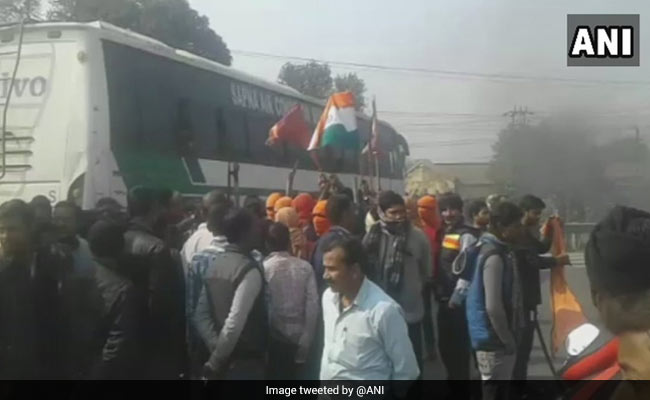 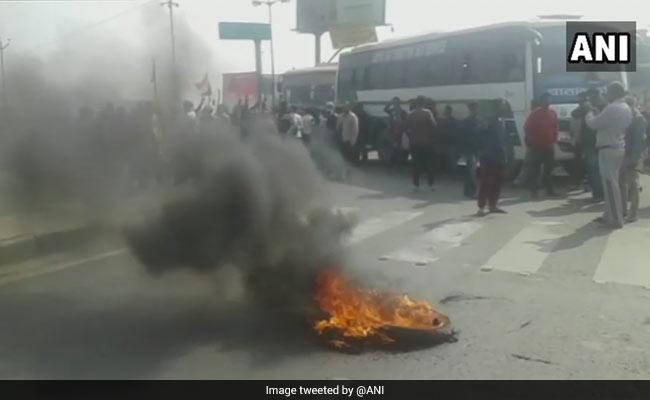 Jan 25, 2018 11:45 (IST)
Karni Sena members take out a bike rally in protest against Sanjay Leela Bhansali's 'Padmaavat'. Groups like the Karni Sena allege that the film distorts the story of Chittor Queen Padmini and shows Rajputs in poor light. 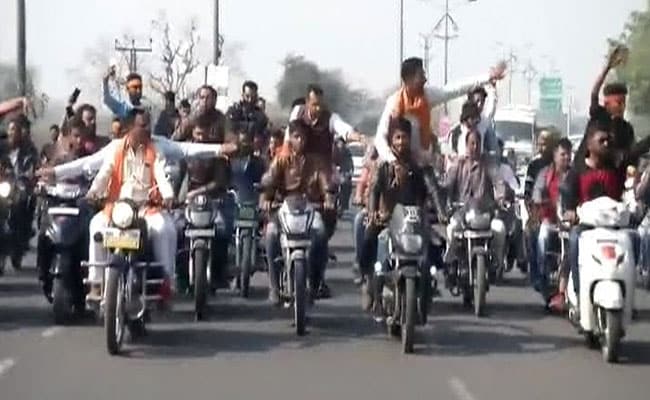 Jan 25, 2018 11:41 (IST)
Amid calls for its ban resonating across several states in the country, Karni Sena stages a protest against the movie Padmaavat in Jaipur. 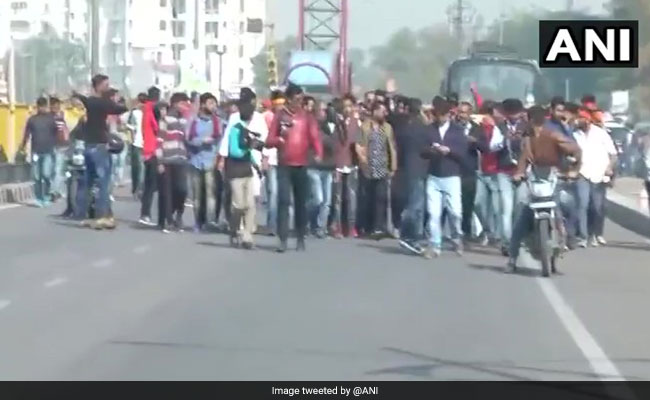 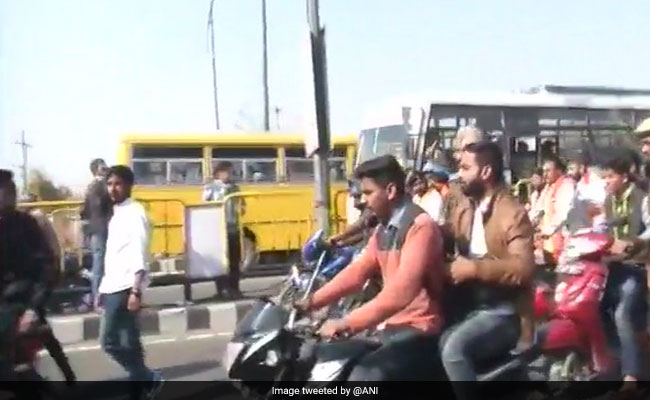 Jan 25, 2018 11:36 (IST)
Security has also been beefed up at Jaipur Literature Festival following threats from the Rajput group Karni Sena. Sanjoy K. Roy, managing director of Teamworks Arts, which organises JLF says, "We are confident that here in Jaipur everything is safe and calm and we feel there will be no issue whatsoever. Prasoon Joshi is in the programme and we hope that he joins us. If everyone will take law in its hand, it will create great chaos. " 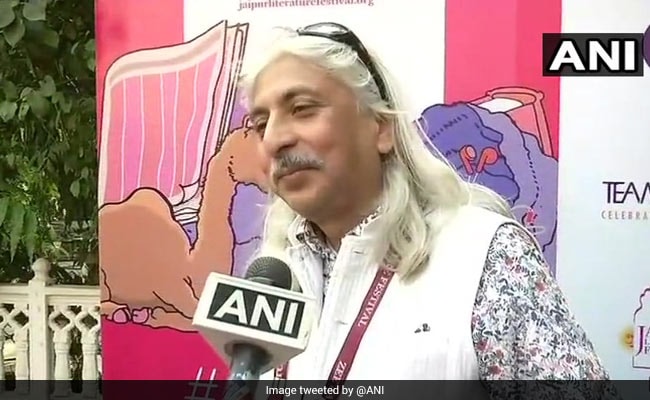 The fringe group had earlier threatened Censor board chief Prasoon Joshi that he will not be allowed to attend JLF.
Jan 25, 2018 11:27 (IST)
Delhi High Court refuses to entertain plea against Padmaavat. High Court has asked the petitioner to approach Supreme court.
Jan 25, 2018 11:22 (IST)
A contempt petition has also been filed against four states - Madhya Pradesh, Rajasthan, Gujarat and Haryana - for not obeying orders to screen Padmaavat. The petitioner claimed that the four states had failed in their duty to maintain law and order in the states.
Jan 25, 2018 11:20 (IST)
Contempt petition has been filed in the Supreme Court against three members of Karni Sena for violating Supreme Court order on Padmaavat.
Jan 25, 2018 11:15 (IST)
BJP leader Subramanian Swamy says,"The film opens old wounds and that is why such films should not be made. What is the historical value of the movie? Zero. They say it has nothing to do with history, then why are you making it ? Also, why is Rahul Gandhi not taking a stand on it ?" 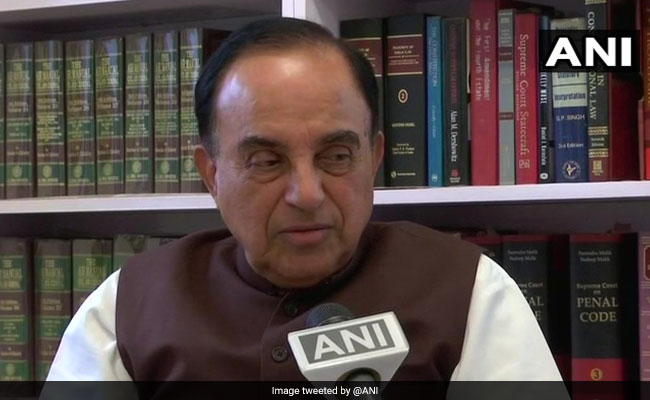 Jan 25, 2018 11:01 (IST)
Neeta Bali, Principal, GD Goenka school says,"Student and teachers are safe. The staff handled the situation and teachers didn't let students panic.We are grateful to our staff who were able to tackle the situation so beautifully as they are trained for this." Yesterday, the fringe groups had attacked the school bus to protest the film. A video captured the horror of more than two dozen schoolchildren of the GD Goenka World School, cowering in fear as their bus was being hit with stones. It has generated waves of outrage.
Jan 25, 2018 10:51 (IST)
Heavy security has also been deployed outside Chittor Fort in Rajasthan. Yesterday, the Chittor Fort, the magnificent setting of the Padmavati legend in Chittorgarh, had been shut down for a day, for the second time in its centuries-old history after members of the Karni Sena, which has led protests against the film, tried to break in. 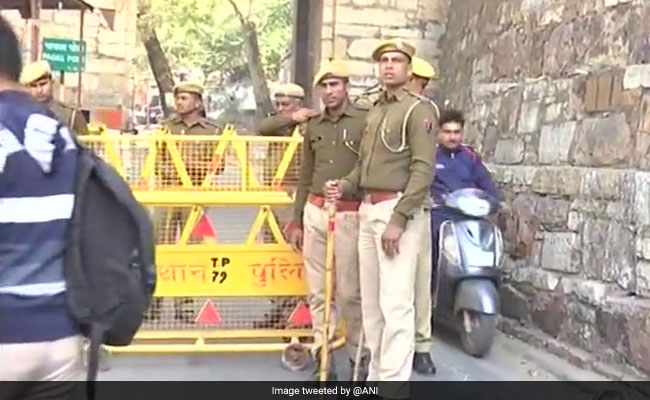 Jan 25, 2018 10:29 (IST)
Senior Congress leader and former chief minister Digvijaya Singh says, "Anything made on any religion, caste, and history any different than what it is and if the sentiments of the people are hurt, then such films should not be made." 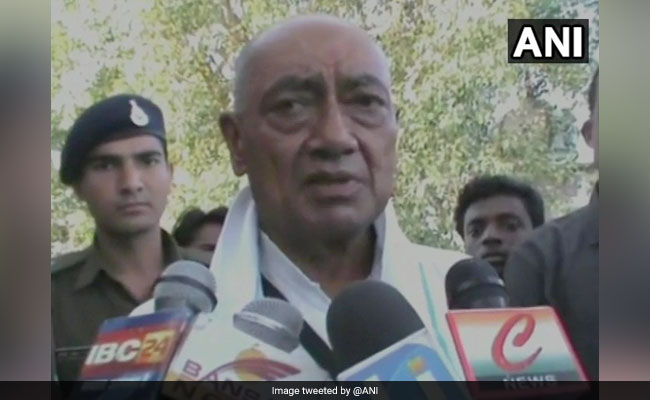 Jan 25, 2018 10:12 (IST)
Police are on high alert across several states after protesters pledged to disrupt the release of the movie 'Padmavaat'. Visuals from Novelty  theatre in Lucknow where audience were frisked from head to toe. Novelty is one of Lucknow's oldest theaters. 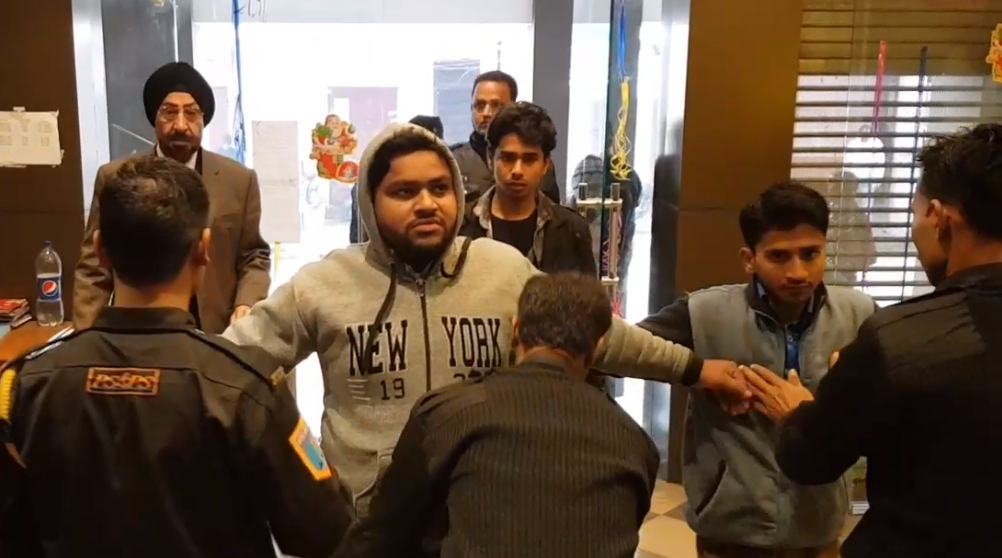 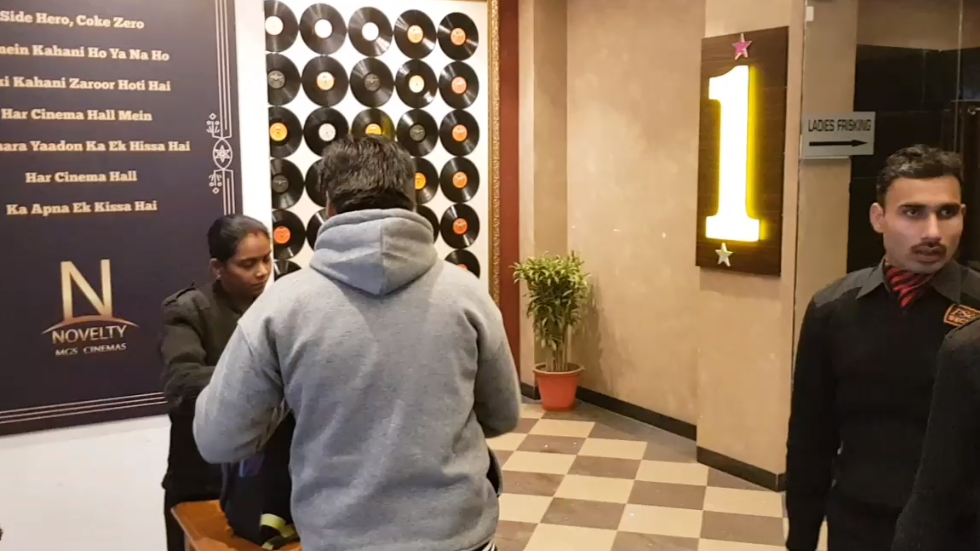 Jan 25, 2018 09:55 (IST)
Theater in Rajouri Garden witnesses a good turn out on first day of the release of the controversial period drama 'Padmaavat'. People going to watch the movie say, 'want to see the reason behind all that uproar'. 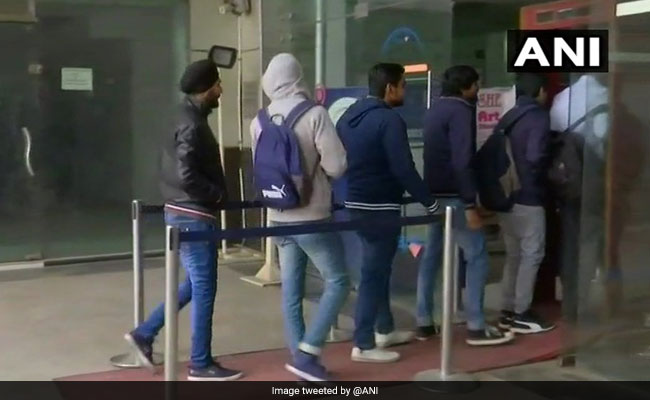 Jan 25, 2018 09:46 (IST)
Protestors torched a car during their protest against Padmaavat in Bhopal on Wednesday. Police say two people have been taken into custody according to ANI reports. 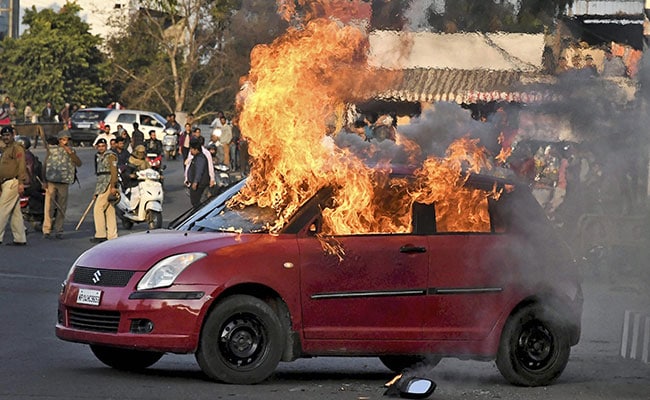 Jan 25, 2018 08:51 (IST)
E-Square cinema mall owner in Pune says, "Its peaceful. The current show is housefull. There is security and police presence in place. All good as of now." 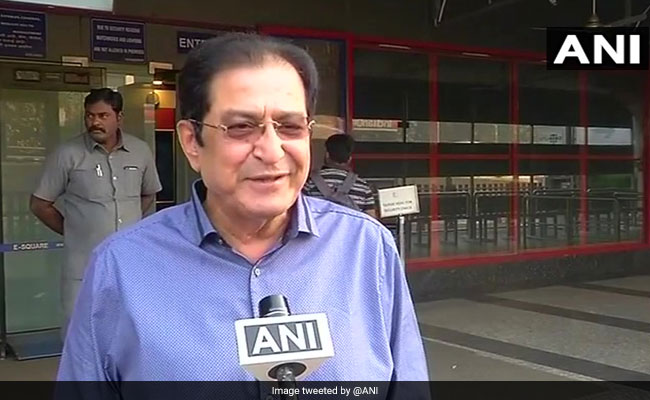 Jan 25, 2018 08:45 (IST)
A parent says, "There is panic, if school bus can be attacked in Gurugram then can happen in Delhi also, even here there are cinema halls near schools, so have come to drop my child to school myself." 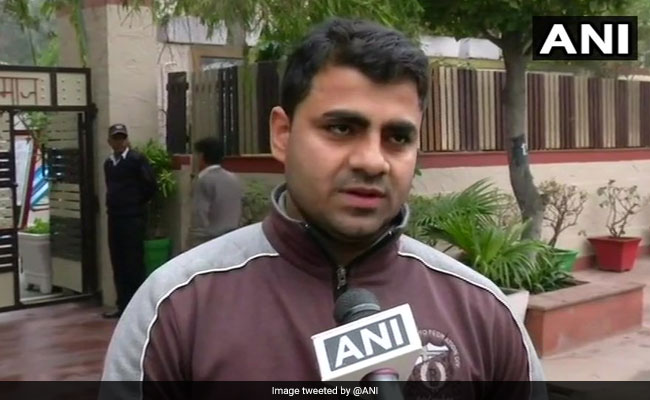 Jan 25, 2018 08:44 (IST)
After the miscreants protesting against the release of the film Padmaavat created ruckus yesterday by throwing rocks at a schools bus in Gurgaon near Delhi yesterday, several schools have been closed in the district have decided to remain shut.
Jan 25, 2018 08:38 (IST)
Udaipur ADM SC Sharma has issued orders stating that students in both government and private schools should not perform on the 'Ghoomar' song during Republic Day celebrations.
Jan 25, 2018 08:36 (IST)
Sanjay Leela Bhansali's 'Padmaavat' is slated to release today admist high security in theatres.