Congress leader P Chidambaram said, "Five years after the infamous demonetisation, what is the status of the lofty pronouncements of the Modi government." 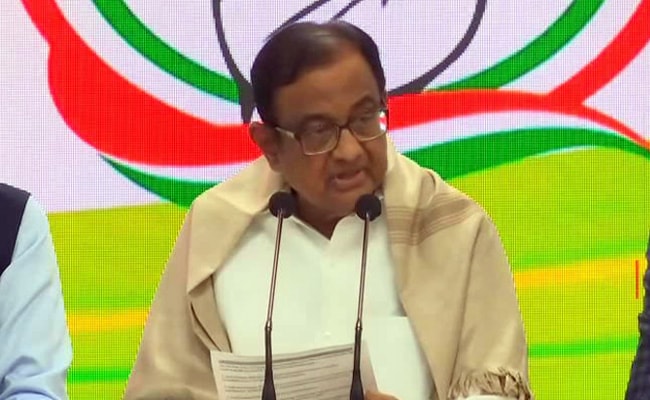 Senior Congress leader P Chidambaram on Friday attacked the Modi government over demonetisation and raised questions over its goals, pointing to the 'rise' in cash in circulation.

"Five years after the infamous demonetisation, what is the status of the lofty pronouncements of the Modi government," he asked on Twitter.

"Mr (Narendra) Modi first said that we must become a cashless economy! Within days he realized it was an absurd goal. He modified the goal to a less-cash economy! At the time of demonetisation, cash in circulation was about 18 lakh crore. Today, it is 28.5 lakh crore!" he tweeted.

Five years after the infamous demonetisation, what is the status of the lofty pronouncements of the Modi government?

Mr Modi first said that we must become a cashless economy! Within days he realized it was an absurd goal

He modified the goal to a less-cash economy!

"Thanks to high unemployment and inflation, the poor and the lower middle class earn less cash and spend less cash. We have indeed become a less cash economy! Three cheers!" the former finance minister said.

Five years after demonetisation, currency notes in circulation continue to rise albeit at a slower pace even as digital payments surge with more and more people embracing cashless payment modes.

Primarily, banknotes in circulation went up in the last financial year as many people opted for the precautionary holding of cash amid the COVID-19 pandemic disrupting normal lives and economic activities in varying degrees.

In a separate tweet, Mr Chidambaram said, "Kerala Finance Minister K N Balagopal revealed some figures on taxes collected on petrol and diesel, and if they are wring, the Union Finance Minister, Nirmala Sitharaman, must issue a rejoinder."

"The numbers reveal that Rs 3,72,000 crore was collected in 2020-21 as excise duty, cess and additional excise duty. Of this huge sum, only Rs 18,000 cr was collected as basic excise duty and 41% of that amount was shared with the states. The remaining amount of Rs 3,54,000 crore went to the Centre. This is the model of 'co-operative federalism' practised by the Modi government!" he said.

Besides, where and how and on what was this humongous amount of Rs 3,54,000 crore spent, the Congress leader asked.

"One part was used to fill the hole created by reducing corporate taxes and giving the corporates a bonanza of Rs 1,45,000 crore," he claimed.