Saraj Singh was wanted in several cases under the Narcotic Drugs and Psychotropic Substances Act registered at different police stations places in the state: Police 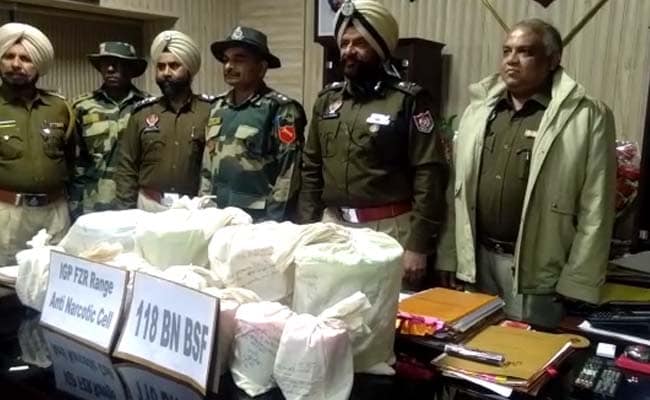 Police said this was one of the major haul of drugs since January this year.

The Punjab Police Sunday seized 14 kilograms of heroin, smuggled into the state from Pakistan, and arrested a drug peddler.

He said following intelligence inputs, a team of the Anti-Narcotics Cell carried out a search operation in the Ferozepur Sadar area and arrested Siraj Singh, a resident of Tarn Taran district.

He said Saraj Singh was a wanted drug smuggler operating in various border districts, including Amritsar, Tarn Taran and Ferozepur.

"Besides a car, 1.6 Kg of heroin was recovered from his possession. An FIR was registered against him under the provisions of the NDPS Act," said MS Chinna.

The IG said during preliminary investigation, Siraj Singh revealed the details about the consignment of drugs which had been sent by a Pakistani drug smuggler, Azoob, from across the border.

He said the police team took Siraj Singh across the barbed wire fencing near a border outpost on the Indo-Pak border.

He said the BSF officials were also taken into confidence and later a joint operation was planned.

In that operation, another 13.650 Kilograms of heroin was recovered from an area near a border pillar along the zero line, China said.

He said this was one of the major haul of drugs since January this year.