"Opinion Polls Failed In Past": Defiant Mayawati In Agra

Bahujan Samaj Party chief Mayawati dismissed opinion polls today, calling them "useless" and told people not to fall for the "media narrative" that she is missing in action. 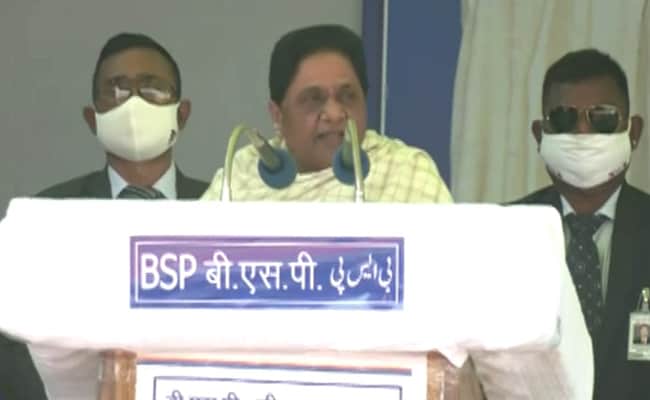 Until 2017, Agra was a bastion of Mayawati's party, which won most of its nine seats

Bahujan Samaj Party chief Mayawati dismissed opinion polls today, calling them "useless" and told people not to fall for the "media narrative" that she is missing in action. "Opinion polls have failed in the past and they will fail again. They will be useless. Do not fall for false promises of other parties," she added, referring to the multi-cornered contest in the state that begins next week.

Speaking at Agra -- seen as the Dalit capital of Uttar Pradesh with a chunk of its population belonging to the community -- Ms Mayawati said, "I truly believe that our Dalit community did not fall for the false narrative by the media that their leader is missing".

"All those in the media who asked "Behenjikidhar hain" (where is Behenji), let me tell you Behenji yahin hain aur taiyaariyon me lagi thin (Behenji is here is involved in preparations for polls)," she said at the meet, implying that she has so far been active behind the screens.

The four-time Chief Minister, who has been out of power for a decade, has rarely been in the public eye in the run-up to the election. Her party is seen as way behind Akhilesh Yadav-led Samajwadi Party in terms of drawing crowds.

Mayawati, whose last term in power was marked by huge expenditure in ostentatious parks and statues, has already declared that if she returns to power, she will not build memorials, parks and statues but focus on development.

Agra has a population of over 7.5 lakh Dalits, most of whom are from the Jatav community -- known to be the core constituency of the BSP.

Until 2017, Agra was a bastion of Mayawati's party, which won most of its nine seats. In 2017, the BJP won all nine seats of Agra as it swept to power in the state.

With two of the nine seats reserved for Scheduled Caste candidates, the BJP is also busy wooing the Dalit voters. The party has fielded Baby Rani Maurya, who is taking on Bahujan Samaj Party's Kiran Prabha.  Ms Maurya, the former Governor of Uttarakhand, was the first woman mayor of Agra from 1995 to 2000.

With elections due in western Uttar Pradesh in the first phase on February 10, the BJP's top leadership is also crisscrossing the area today. Union minister and the party's chief strategist Amit Shah is in Aligarh and Chief Minister Yogi Adityanath is in Mathura.