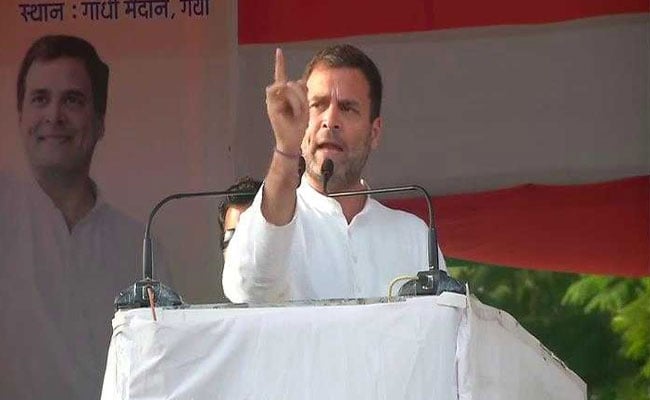 Rahul Gandhi shared dais with Shatrughan Sinha at a rally in Gaya.

Congress chief Rahul Gandhi today said Prime Minister Narendra Modi was trying to create  two nations. "One would be for Anil Ambani, Nirav Modi and one for us," said the Congress chief, who has been repeatedly accused of playing into Pakistan's hands by the ruling BJP.

"Whenever we talk about giving money to poor people, Narendra Modi says 'where will the money come from'? I will tell you where the money will come from. It will come from Anil Ambani's pocket," said Mr Gandhi, who was campaigning in Bihar's Gaya for Jitan Ram Manjhi.

Mr Gandhi repeated the Congress promise of 32 lakh jobs if the UPA comes back in power. Of these, 22 lakh jobs are in government offices and the rest in panchayats, he has said.

Reiterating that unlike PM Modi, he doesn't lie, Rahul Gandhi said these are existing jobs that can be provided to unemployed people.  "Similarly, I'm not promising 15 lakh rupees but just Rs 3.6 lakh to two crore families, which will kickstart the economy," he said.

Jitan Ram Manjhi, Chief Minister of Bihar for a short while when Nitish Kumar stepped down in 2014, has been part of the opposition alliance since last February. His Hindustan Awam Morcha is one of the four smaller parties in the coalition where the most prominent are the Congress and Lalu Yadav's Rashtriya Janata Dal.

In this election, he has been allotted three of Bihar's 40 seats. But all the key leaders of the opposition have turned up to campaign for him. Yesterday, Tejashwi Yadav -- leader of Lalu Yadav's Rashtriya Janata Dal and the star campaigner of the opposition -- had come canvassing on his behalf.

Today, Shatrugan Sinha who recently joined the Congress, made his first public appearance as a member of the party.

Addressing the crowd ahead of Mr Gandhi, he focussed on targeting the government over demonetisation and the flagship Goods and Services Tax.