On Rafale Controversy, Congress' "Stink And Sink" Jibe At Government

Congress chief Rahul Gandhi hit out at the PM Modi government for reportedly targeting the Defence Ministry official who allegedly raised "objections" over the price of the Rafale jets. 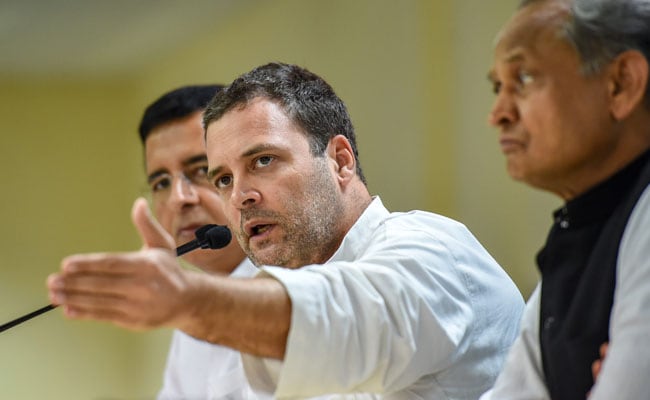 Rahul Gandhi alleged that the officer who raised questions over the deal was penalised. (File)

The Congress on Thursday stepped up attack on the PM Modi government over the Rafale fighter jet deal, alleging it targeted the official who had reportedly raised "objections" on its price.

Staging a protest march in Mumbai, the party demanded that Prime Minister Narendra Modi and Defence Minister Nirmala Sitharaman submit their resignation to facilitate a free and fair probe into the matter.

The opposition party also claimed that French President Emmanuel Macron did not contradict Francois Hollande's claim that the PM Modi dispensation had suggested the private offset partner, instead of the state-run Hindustan Aeronautics Limited (HAL), for the deal, which was tantamount to the confirmation of his predecessor's claim.

The Congress said the Rafale scam has begun to "stink" and the Prime Minister Narendra Modi-led government has "begun to sink".

Congress chief Rahul Gandhi hit out at the PM Modi government for reportedly targeting the Defence Ministry official who allegedly raised "objections" over the price of the Rafale jets.

He took to Twitter to take a swipe at PM Modi with a poem in Hindi alleging that he gave benefits to "crony capitalists" at the cost of the state-run Hindustan Aeronautics Limited in the Rafale deal.

Mr Gandhi also alleged that the officer who raised questions over the deal was penalised, while those who sided with the government were rewarded.

He tagged a media report that alleged that the Defence Ministry official who raised objections over the price of the Rafale jets "proceeded" on a month's leave and the 36-Rafale deal was approved by the Defence Acquisition Council thereafter.

Citing the same media report, Congress's chief spokesperson Randeep Surjewala, in a Tweet, claimed that the PM Modi government "sent on leave the 'whistleblower'", who questioned the loss to the state exchequer "by paying 300% extra for 36 Rafale".

He also alleged that a senior officer, who overruled the official who raised questions over the Rafale jets pricing, was made a member of the Union Public Service Commission (UPSC).

Mr Gandhi at a poll rally in Chitrakoot in Madhya Pradesh said, "The man, who claims to be the country's watchman, has himself put Rs 30,000 crore in the pocket of (industrialist) Anil Ambani in the Rafale deal,".

Describing Anil Ambani as PM Modi's "friend", the Congress leader alleged that the industrialist has a debt of Rs 45,000 crore.

Congress leader Jaipal Reddy said at the AICC headquarters here that India has had a very good relationship with France and "when a former French president says something, this country needs to sit up and take notice".

"They would not have chosen Anil Ambani's company but for the pressure of the Government of India. So, this non-contradiction by the current President of France is equivalent to an international revelation - international confirmation. Now, Modi stands self-condemned," Mr Reddy alleged.

"It is for the first time that the present French president Macron, while answering a specific question, avoided the question. He simply said I was not in-charge at that time. In other words, he did not contradict the version of former French president Hollande," he claimed.

The Congress leader said it is "very unfortunate" that the Government of India is involving the serving Chiefs of Air Force, Army on such matters and said, "We don't enter into arguments with the serving chiefs."

Mr Reddy said the prime minister owes an explanation to the nation about the statement made by the former President of France on Anil Ambani's company.

In Mumbai, the party staged a protest march over Rafale deal and demanded a probe by a Joint Parliamentary Committee (JPC) or a Supreme Court-monitored inquiry.

Congress leader in Lok Sabha Mallikarjun Kharge accused the PM Modi government of concealing information regarding the price of the fighter planes.

"The government should explain the inflated cost and who is going to benefit by it... The offset contract which is part of the Rafale purchase deal was taken away from Hindustan Aeronautics Limited (HAL) under pressure," he alleged, while addressing party workers at August Kranti Maidan in Mumbai.