The Tamil Nadu Chief Minister expressed that he is "eagerly waiting" to see MS Dhoni play again in Chennai for the IPL club. 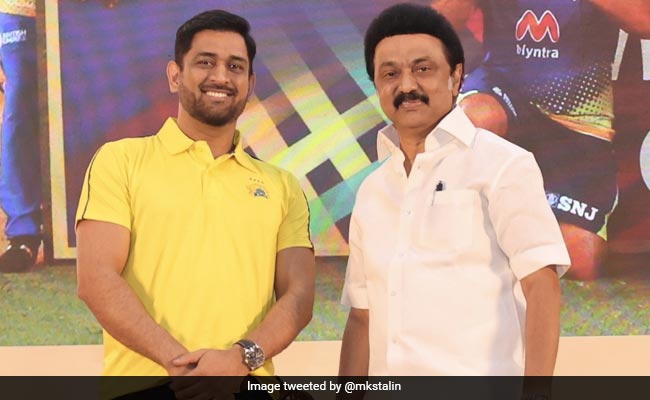 Taking to Twitter, Mr Stalin said that Dhoni's “unparalleled achievements” have given hope to millions of youngsters from rural backgrounds to pursue their dreams. The Tamil Nadu Chief Minister, who is a self-confessed Dhoni fan, also expressed that he is “eagerly waiting” to see the legendary cricketer play again in Chennai for the IPL club.

Your unparalleled achievements have given hope to millions of youngsters from humble rural backgrounds to pursue their dreams.

Eagerly waiting to see you play again in our own #Chennai.#HappyBirthdayDhonipic.twitter.com/Drb2um69Rg

Back in May, MS Dhoni confirmed that he will be back next year playing in the Indian Premier League (IPL) for the Chennai Super Kings. He has been the face of CSK for well over a decade. Under him, CSK has won four IPL titles in 2010, 2011, 2018 and 2021. Dhoni also represented the Rising Pune Supergiant for two years. But when he returned to lead the CSK again, he led them to their third IPL trophy.

Meanwhile, coming to his birthday celebrations, his wife Sakshi shared a glimpse of Dhoni's birthday celebration on her Instagram account. In the clip, the cricketer can be seen cutting the cake. In the background, a big banner that read, “Happy Birthday Mahi” can also be seen hanging.

Wishes also poured on social media. Cricketers including Virendra Sehwag, Suresh Raina ad Mohammad Kaif wished MS Dhoni on Twitter. “Till the time full stop doesn't come,a sentence isn't completed. Till the time Dhoni is at the crease,match isn't completed. Not all teams have the fortune to have a person like Dhoni, Happy B'day to a gem of a person & player,MS Dhoni. Om Helicopteraya Namaha,” wrote Sehwag.

Watch: Massive Portion Of Flyover Falls Off On Shimla-Kalka Highway