PM Narendra Modi said, "A special campaign is being worked out to reduce pollution in 100 selected cities with a holistic approach." 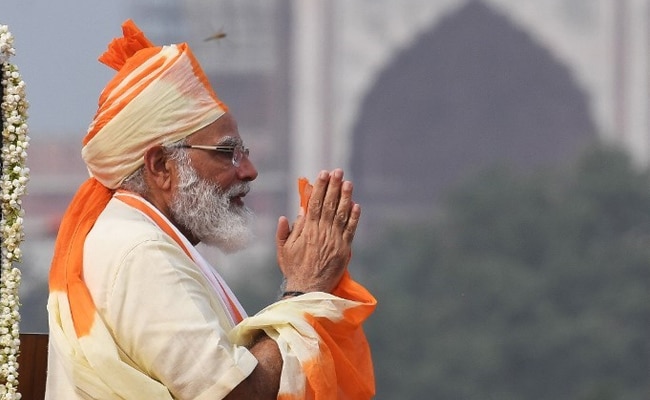 PM announced government's plans for the protection of the environment.

From launching projects to conserve Gangetic dolphins and Asiatic lions to making Ladakh carbon neutral, Prime Minister Narendra Modi announced his government's plans in the kitty for the protection of the environment on Saturday.

Delivering his speech from the ramparts of the Red Fort on the occasion of the 74th Independence Day, the prime minister said, "A special campaign is being worked out to reduce pollution in 100 selected cities with a holistic approach."

Announcing big plans for Ladakh, he said, "Just like Sikkim has made its mark as an organic state, efforts are being made to make Ladakh a carbon-neutral region."

According to officials, Ladakh accounts for 0.1 per cent of the country's total emissions.

Carbon neutrality means achieving a balance between emitting carbon and absorbing it from the atmosphere in carbon sinks.

Talking about giving a push to the country's biodiversity, PM Modi announced a 10-year project to conserve the Gangetic dolphin, which was declared the national aquatic animal in 2010.

Project Dolphin aims to give a stronger impetus for the conservation of the species on the lines of Project Tiger and Project Elephant.

According to official figures, there are about 3700 Gangetic dolphins in Indian river systems.

The prime minister also said the government will soon launch a project to conserve Asiatic lions.

He hailed the country's efforts in increasing the numbers of tigers and lions in recent times.

According to the ministry of environment, Project Lion will entail habitat development, engage modern technologies in lion management and address the issue of diseases in lions and associated species through advanced, world-class research and veterinary care.

The project will address the issue of human-wildlife conflict, involve the local communities living in the vicinity of the lions' landscape and also provide livelihood opportunities, a spokesperson of the ministry said.

A report released by the Ministry of Environment, Forests and Climate Change earlier this year had said there was a 29-per cent increase in the population of the Asiatic lions that live in Gujarat's Gir forest, taking the number from 523 in 2015 to 674 in 2020.

According to the 2018 tiger census, the figures of which were released in 2019, India's wild tiger population increased by over 30 per cent in four years, with the census declaring 2,967 big cats, up from 2,226 four years ago.

"Situation In The Country Cause For Fear": Amartya Sen Appeals For Unity