Harjot Kaur Bhamra, who heads Bihar Women and Child Development Corporation, says she "meant to inspire girls who are chained by patriarchy" 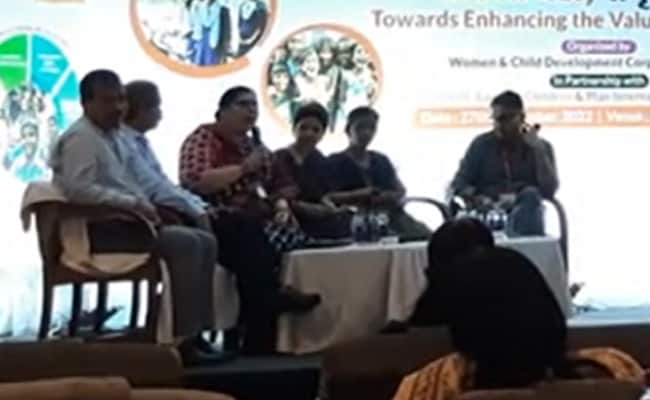 Bihar IAS officer Harjot Kaur Bhamra, who told a young woman "you'd want condoms too" on a question about sanitary pads, has apologised for her comments, though only after the National Commission for Women (NCW) sent her a notice and the Chief Minister ordered an inquiry.

This morning, the women commission directed Ms Bhamra, Managing Director of the Bihar Women and Child Development Corporation, to file a reply to its notice within seven days. In the afternoon, Chief Minister Nitish Kumar said in response to queries: "I have seen the news reports and ordered an inquiry. I see everything. If she's guilty, action will be taken."

By the evening, Ms Bhamra, who had yesterday threatened to sue a newspaper for "misreporting" about the Tuesday event, issued a statement of "regret" and claimed her comments were to inspire girls "who are often chained by patriarchy".

She said, "If you pay attention to what I said, I was only meaning to urge the girls towards atma-nirbharta (self-sufficiency)... If anyone's feelings were hurt, however, I express regret. I did not intend to hurt or degrade anyone."

Videos show how Ms Bhamra had a series of snarky answers to questions by girls on stage and the audience at the event in Patna.

At the Tuesday event, a girl on stage with Ms Bhamra had asked her: “The government already gives uniform and scholarships, so can it give sanitary pads at Rs 20-30?”

The officer had replied, “Tomorrow you'll say the government can give jeans too. And why not some beautiful shoes after that? You will eventually expect the government to give you family planning methods, condoms, too.”

The girl — a teenaged student from a slum — had even underlined that people's votes make the government, but Ms Bhamra snapped at her: “This is heights of stupidity. Don't vote, then. Become Pakistan. Do you vote for money and services?”

Ironically, this happened at workshop titled ‘Sashakt Beti, Samriddh Bihar' (Empowered Daughters, Prosperous Bihar), the tagline of which read: ‘Towards enhancing the value of girls'. It was organised by the state's corporation that Ms Bhamra heads, with assistance from UNICEF and other organisations.

On the pot, too, Ms Bhamra had sought to paint her remarks as a lesson in self-sufficiency. "You have to decide where you want to see yourself in the future... The government cannot do this for you. Do you want to sit where you are, or on the side I am sitting on?"