Bansidhar Bhagat's comment about Indira Hridayesh had drawn a sharp reaction from the Congress, which demanded that BJP chief JP Nadda take note of the issue and ask Mr Bhagat to apologise. 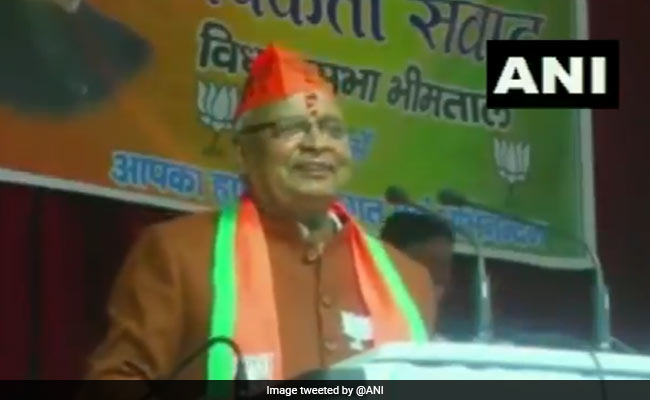 "Who would contact a sinking ship?" Uttarakhand BJP chief Bansidhar Bhagat had said.

The opposition Congress in Uttarakhand has demanded that the state Bharatiya Janata Party chief Bansidhar Bhagat apologise for his derogatory and sexist comment on Leader of the Opposition Indira Hridayesh. Responding to 79-year-old Ms Hridayesh's remark that some BJP MLAs who are not happy with the party were in touch with her, Bansidhar Bhagat had questioned why they should contact "an old woman".

"Our LoP is saying that several MLAs are in our touch... arre budhia, tujhse kyun sampark karengey (Why would they get in touch with an old woman like you?" he had said. "Who would contact a sinking ship?" he had added, to laughter and cheers from the assembled BJP workers at a programme.

The comment had drawn a sharp reaction from the Congress. The party took to Twitter, demanding that BJP chief JP Nadda should take note of the issue and ask Mr Bhagat to apologise.

The party posted a video on its Twitter handle, in which Indira Hridayesh said, "Party chief of a state is a symbol of the party and represents the state. The derogatory words used for me by Bhagat has hurt me. I demand from BJP national chief Nadda to take cognisance and ask Bhagat to apologise."

The Congress and the BJP have been at loggerheads in the state over allegations of money laundering by a firm linked to Chief Minister Trivendra Singh Rawat's Industrial Adviser KS Panwar.

Last month, in the winter session of the assembly, the Congress alleged that the Chief Minister's claim of zero tolerance to corruption is no more than a slogan. Indira Hridayesh had been vocal about the issue, saying the government's lack of will to combat corruption is also reflected in its failure to create the post of a Lokayukta.