As rescue operation at the Thai cave site is underway, international sand artist Sudarsan Pattnaik created a sand sculpture on the same theme at Puri Beach in Odisha. 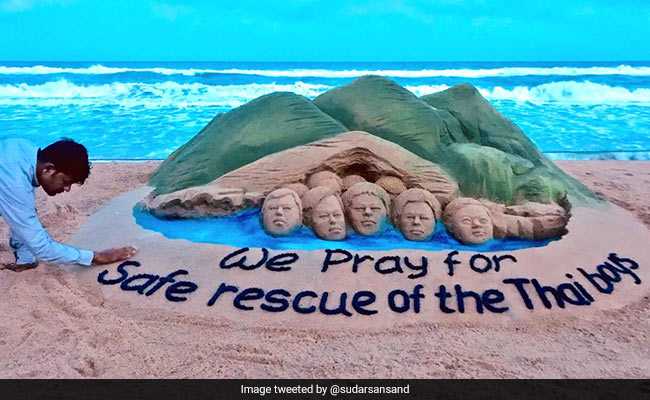 Thailand has been riveted by the dramatic rescue mission to save 12 players and their coach from the "Wild Boars" team after they first got trapped in Tham Luang cave more than two weeks ago by rising floodwaters.

Rescuers are racing to extract the rest of the squad and their coach as heavy rains pick back up, threatening to complicate the last phase of the mission by re-flooding the cave.

As rescue operation at the cave site is underway, international sand artist Sudarsan Pattnaik created a sand sculpture on the same theme at Puri Beach in Odisha.

#ThaiCaveRescue: I pay tribute to diver Saman Kunan who died during the difficult cave rescue operations. My SandArt at #Puri beach in India with message RIP...True Hero pic.twitter.com/SeBNadM8s6

Depicting the boys stuck inside the cave, the message on the sculpture read, "We pray for the safe rescue of the Thai boys."

Mr Pattnaik used five tons of sand for his 'Thai Cave Rescue' creation and it took him three hours to complete the four-feet high piece of art.

"I created this sand sculpture with my prayers for the rescue of the boys stuck inside the cave. I pray to God that the boys return home safely," said Mr Pattnaik.

Out of 13 Wild Boars soccer team members, eight have so far been rescued from the Tham Luang cave in northern Thailand's Chiang Rai. The rest five are being rescued.