Nusrat Jahan, a newly-elected lawmaker from Mamata Banerjee's Trinamool Congress who has made headlines since her parliament debut, was a special invitee at the annual Rath Yatra in Kolkata today.

Under attack from Muslim clerics for wearing sindoor and mangalsutra during her oath in parliament after her wedding, actor-politician Nusrat Jahan made a statement by repeating the look as she stood next to Chief Minister Mamata Banerjee at the Rath Yatra at Minto Park organised by Iskcon.

Mamata Banerjee pulled the chariot of Lord Jagannath at the procession, as she has done before.

But it was Nusrat Jahan's presence that was seen as a message - not just from the MP but also by Iskcon.

"Didi (Mamata Banerjee) comes for Eid and stands with all. There is no politics in this, it is about faith and belief. Let's keep politics and religion apart," Nusrat Jahan told reporters. 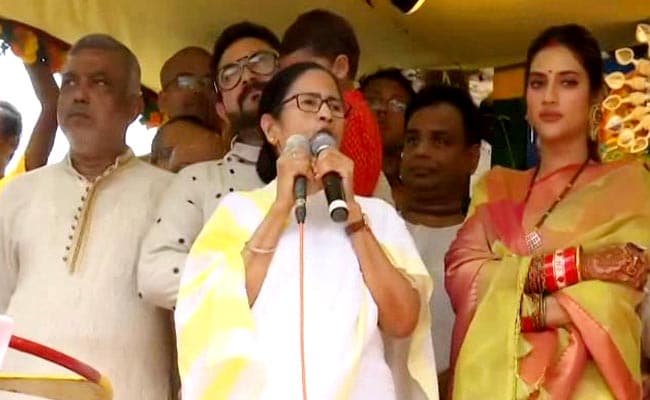 Mamata Banerjee pulled the chariot of Lord Jagannath at the procession. Nusrat Jahan was also present

Asked about the firestorm she has faced from some Muslim clerics over her sindoor-sari-mangalsutra look in parliament, the first-time MP from Basirhat said: "I don't pay heed to baseless (things). I am Muslim in my heart."

Calling herself "blessed" for the opportunity to be part of the event, she added: "Young India stands for inclusive India, secularism, humanity."

Her husband Nikhil Jain said he was "proud" of his wife - he referred to her as Naina - for giving trolls a fitting reply.

Nusrat Jahan represented an "inclusive India", an Iskcon official Radharaman Das was quoted as telling the Press Trust of India. He said the Iskcon Kolkata Rathayatra was "an example of social harmony in which the Lord's chariots were also built by our Muslim brothers".