Nusrat Jahan has claimed that her marriage is not a legal one and called it a live-in relationship as the wedding in Turkey did not have recognition under Indian law. 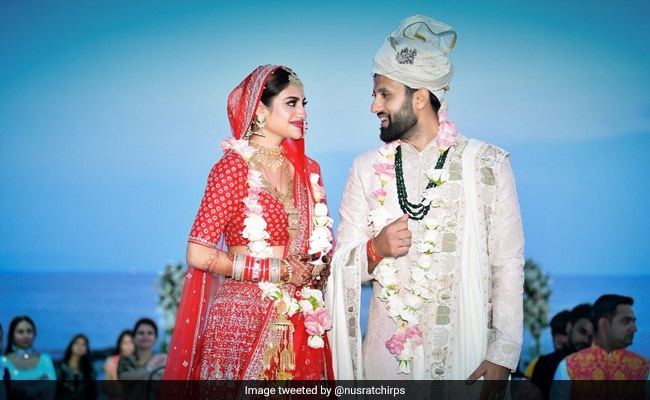 "The TMC MP and film actor Nusrat Jahan gave a false affidavit hiding her actual marital status. I have sent a letter to Lok Sabha Speaker Om Birla in this regard on June 19," Ms Maurya, who was on a day's visit to her constituency, told reporters.

Popular Tollywood actor and TMC MP Nusrat Jahan had earlier this month claimed that her marriage to businessman Nikhil Jain was not a legal one and called it a live-in relationship as the wedding in Turkey did not have recognition under Indian law.

Ms Jahan, who is reportedly dating actor and BJP's Assembly poll candidate in the recently concluded Bengal election Yash Dasgupta, said, in a statement, that since her wedding ceremony with Nikhil Jain was held in accordance with the Turkish Marriage Regulation, the marriage is not valid in India.

Terming the TMC MP's conduct as "unethical", Sanghamitra Maurya said Nusrat Jahan has deceived her voters on the issue of her marriage, tarnished the image of Parliament and undermined its dignity.

"This issue needs to be sent to the Ethics Committee for proper investigation and she should be disqualified," Ms Maurya said, adding that Nusrat Jahan has lied in the temple of democracy where rules are made and from where the country is run.

"I have no interest in the TMC MP's personal life but I have written a letter to the speaker mentioning that in her affidavit to the Lok Sabha, Nusrat Jahan had shown her marital status as married and also took oath as Nusrat Jahan Nuri Jain, giving the name of her husband as Nikhil Jain," Ms Maurya said.

"Then you say your marriage is not valid. You lied to the public, you lied to the country's Parliament. It is not Bengal which follows the diktats of Mamata didi. You are giving a wrong statement and there should be an investigation in this matter and action should be taken," she said.

"I have written to the Lok Sabha speaker and he will definitely take action in this connection," she added.