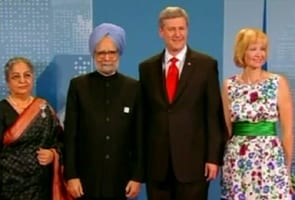 Toronto: Prime Minister Manmohan Singh on Monday ruled out the possibility of nuclear material or equipment supplied to India under civil nuclear cooperation agreements being used for "any unintended purpose."

"Nuclear material supplied to India will be fully safeguarded in terms of agreement signed with International Atomic Energy Agency (IAEA). We have fool-proof system of export controls.

"We have complete control and there is no scope for any nuclear material or equipment being supplied going for any unintended purpose," Singh told a joint press conference with his Canadian counterpart Stephen Harper after the two countries signed a civil nuclear cooperation agreement.

He was responding to a question whether there were enough safeguards to prevent nuclear material coming to India under such agreements being used for any weapons programme.

India already has civil nuclear agreements with eight countries like the US, France and Russia.

Replying to questions, Harper said Canada, which had imposed sanctions on India after the Pokhran-I and Pokhran-II atomic tests in 1971 and 1998, cannot live in the past.

"We have received all the reasons that we were looking (for signing a civil nuclear cooperation agreement with India). It is a good agreement. We got much more important reasons because we cannot live in the past of 1970s," Harper said.

He said India is a "powerhouse that is going to play a very important role in the world.

"We are determined to develop cooperation not only for the sake of our industry, but it is also an agreement which is a symbol of our relationship," he said.
Comments
PM in Canadaindo-canada nuke deal