Many villagers say they are being asked to attend hearings at places that are nearly 500 kilometres away at a time when they are still in recovery mode.

Goraimari circle has 1.56 lakh applicants, of which 1.24 made it to the Draft NRC.

The tension in Goraimari, a bustling rural town about 70 km from Guwahati, is palpable. Thousands of people in the area have received fresh re-verification notices for their National Register of Citizens (NRC) credentials, so the authorities can re-check the "legacy data" used to establish their relationship with their ancestors to prove that they entered India before March 1971.

March 1971 is the cut-off month for people to make it into the final National Register Citizens (NRC) list, which will be published on August 31.

"We are perplexed by the fresh notice. We were left out of the draft NRC published last year, after which we raised claims. We have attended a dozen of NRC hearings to get our names cleared. We are left with no new documents to show, no more money to spend," said 40-year-old Mukhtar Ali. He says he has already sold off all his livestock to pay for attending NRC hearings.

Mukhtar Ali and 18 of his relatives have been asked to attend a hearing at Golaghat, 350 km from his village, on August 7.

"The floods abated only a week ago, and we have barely recovered from it. How can we go to Golaghat when we don't even know where it is? I got the notice on August 4 and I am supposed to get there on August 7. I will need around Rs 20,000 but I don't even have Rs 200. I feel like killing myself," he said. 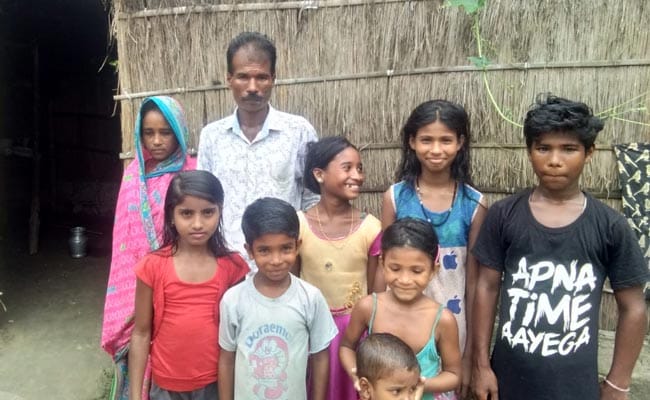 Mukhtar Ali with some of his family members in Goroimari in Assam.

Pabitra Mondal, a 25-year-old mechanic from Chamaria in Kamrup rural district, said he and 50 others had to take a loan of Rs 40,000 from a money lender to arrange for transportation to the place where the NRC hearing was being held. "We did it for fear that they will put us in detention camps and send us to Bangladesh," he said.

According to a reliable source in the NRC, most of those served with re-verification notices hail from lower Assam districts dominated by migrant Muslims. And they have been asked to attend the hearing at a centre that's 300-400 km in upper Assam. A few hundred Bengali Hindus were also served similar notices.

According to official sources, fresh notices have been served to people from Kamrup (rural), Goalpara, Barpeta, Baksa, Chirang , Bongaigaon and Nalbari districts in lower Assam. They have to attend hearings at far-off places in upper Assam districts such as Golaghat, Chairaideo, Sibasagar and Jorhat. Pabitra Monday, a mechanic, says he hired a vehicle for Rs 40,000 to send his 50-member family to Golaghat for the NRC hearing.

"This amounts to harassing downtrodden people in lower Assam. They are poor, and I have come across many who sold their livestock, land and jewellery to fight cases in foreign tribunals and attend NRC hearings in places that are 300-400 km away," said social worker Anis Bhuyan, adding that this was in violation of a Supreme Court order that the hearings should be held in nearby districts.

Goraimari circle has 1.56 lakh NRC applicants, of which 1.24 lakh made it to the Draft NRC and 32,000 were left out. Almost 90% of this number has been asked to undergo re-verification. Official sources said that although 400 such hearings were held up due to the floods, over 4,000 people have now been served notices for re-testing.