East Bengal fans unfurled a sprawling banner that said, "We earned this soil with our blood, not with paper." 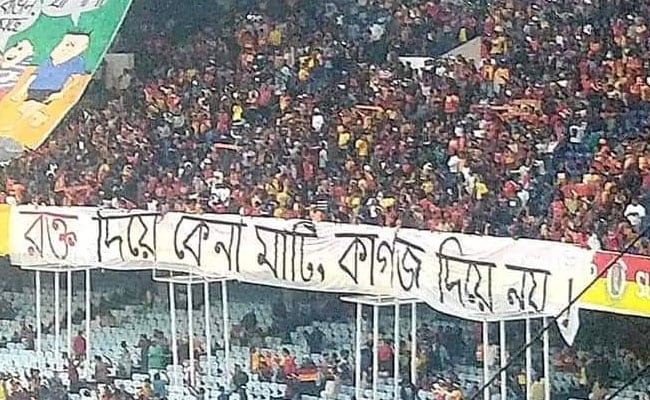 West Bengal has seen some of fiercest opposition to the CAA and the NRC.

Protests in West Bengal against Citizenship Amendment Act (CAA) and the National Register of Citizens (NRC) have been taking place for over a month now on the streets.

Now, these protests have reached the football field - as seen at historically bitter faceoff between the state's top teams East Bengal and Mohun Bagan.

CAA and NRC united fans of the rival football clubs as never before at Sunday's Derby at the Salt Lake stadium.

East Bengal fans unfurled a sprawling banner that said, "We earned this soil with our blood, not with paper."

East Bengal club is traditionally supported by 'Bangals' - people who have come from Bangladesh or erstwhile East Pakistan.

Mohun Bagan is traditionally supported by 'Ghotis' or people from West Bengal.

Their rivalry is historic. And there were some banners that took digs at each other.

But at least one banner reportedly said "Dear son, welcome to our nation."

If CAA and NRC can bring the bitter rivals Mohun Bagan and East Bengal closer, it is clear signal that the protest is snowballing.

There were also an unusual number of Indian flags being waved at the stadium. That too perhaps holds a message.

West Bengal has seen some of fiercest opposition to the CAA and the NRC. Chief Minister Mamata herself has been among the most vocal critics of the steps seen as discriminatory to Muslims.

While the NRC hopes to identify immigrants who came to India after a yet-to-be-decided, the CAA promises citizenship to only non-Muslim refugees from three neighbouring countries.

Critics say the law can be used to target Muslims who can't prove their lineage. The government, however, says it is necessary to help those who faced religious persecution in Pakistan, Bangladesh and Afghanistan.