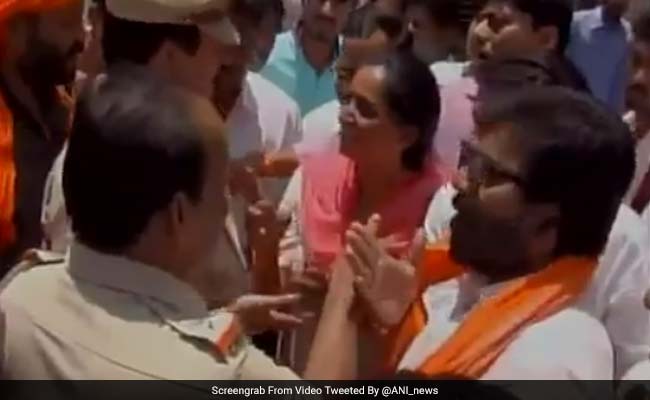 Ravindra Gaikwad was seen arguing with a police officer, in a video, during a protest in Latur.

Mumbai: Less than two weeks after a flying ban on Ravindra Gaikwad was revoked, the Shiv Sena lawmaker finds himself in the news for the wrong reasons once again. A video has surfaced of Mr Gaikwad having a heated argument with policemen over "non-functioning" of ATMs at Latur in Maharashtra's Marathwada region.

In the video, which has gone viral on social media, the 56-year-old lawmaker from Osmanabad can be seen arguing with a police officer during a protest in Latur, where he reached on Tuesday. Mr Gaikwad had sent his aide to withdraw money from an ATM, however, he returned empty-handed, saying the ATM had run out of cash. After this happened at a few other ATMs, the Sena lawmaker staged a protest along with his supporters outside an ATM.

When cops arrived and requested Mr Gaikwad to end his protest as it was disturbing traffic in the area, the lawmaker shouted at them, police said.

However, Mr Gaikwad said, "There is no money in the ATMs for the last 15 days. What should we do? They (the BJP-led government) asked us to give them 50 days (after demonetisation, for normalisation of financial transactions). We gave them 100 days, then 200 days. It is the job of the (Union) Finance Minister and the Finance Minister of Maharashtra. It is also the job of the Guardian Minister of Latur district to rectify the situation."

#WATCH: Shiv Sena MP Ravindra Gaikwad argues with a police officer in Latur (Maharashtra) during a protest over a non-functioning ATM pic.twitter.com/k1rCa12aGc

The incident comes on a day when Air India is believed to have written to the Delhi Police asking why action has not been taken yet on the complaint filed against Mr Gaikwad for assaulting a manager of the airline last month.

On March 23, Mr Gaikwad assaulted an Air India manager, hitting him "25 times" with his slipper. The MP insisted on travelling business class on an all-economy flight. Following the incident, the national carrier along with four leading private carriers blacklisted Mr Gaikwad from flying, till he apologised for the assault.

Promoted
Listen to the latest songs, only on JioSaavn.com
While Mr Gaikwad apologised to the parliament if he has "hurt its image" with his actions, he did not apologise to the Air India manager. Next day, Air India revoked the ban on the lawmaker after written instructions from the Civil Aviation Ministry.