Norway children reach Kolkata; their father hopes he can see them soon 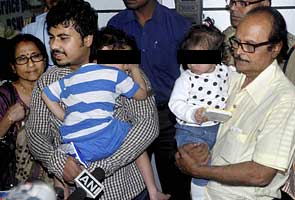 Stavanger: After spending nearly a year in foster care in Norway, toddlers Abhigyan and Aishwarya are back in India. They arrived at the Delhi airport a little before 10 am today with their uncle, Arunabhas Bhattacharya; and have reached Kolkata.

As per the court order, their parents Anurup and Sagarika were not allowed to accompany them to India.  Mrs Sagarika has been in India since last month while Mr Anurup is still in Stavanger. Speaking to NDTV in Stavanger, he said he was relieved that the children were back in their home country. "If I am sitting here it's because I have to respect certain things that the Child Welfare Service wanted us to do. They didn't want me to accompany the children to India. They didn't want me to go to the airport to say bye to them, so I'm respecting that," he said.


Mr Anurup  also admitted the pressures of the Norwegian authorities through last year had affected his marriage in a big way and that he hadn't spoken to his wife ever since the children left Norway.  "Through last year we have been under huge pressure from the workers who used to come to our home. It wasn't easy for us. We were being told at every step how to behave with our own children. We had people watching us and taking our videos at times, or taking notes. The pressure was unbearable," he added.

Mr Anurup also felt that the Norwegian authorities' bias towards them was established before they could do anything." I still feel that cultural differences did play a major role in all of this. The removal of the children, we felt was something they had already pre decided on and the people who came home to us were not helping us but pushing us to the brink to create a situation that would justify the removal of the children, he said.

Mr Anurup finally also acknowledged that his children are India only because the Indian authorities went out of their way to assist them.

It may be recollected that Abhigyan and Aishwarya were separated from their parents Anurup and Sagarika Bhattacharya by the Norwegian Child Welfare Services (CWS) in May last year. Thereafter followed a long legal battle, which only ended yesterday with a Norwegian court ruling that the children's custody be handed over to their uncle.

Promoted
Listen to the latest songs, only on JioSaavn.com
In the interim period, the couple has separated and the kids will now have to adapt to a whole new culture in India with their parents living in two separate countries.