Supertech's twin towers Apex and Ceyane -- part of its Emerald Court project in Noida -- were safely demolished on Sunday, a year after the Supreme Court had ordered their razing. 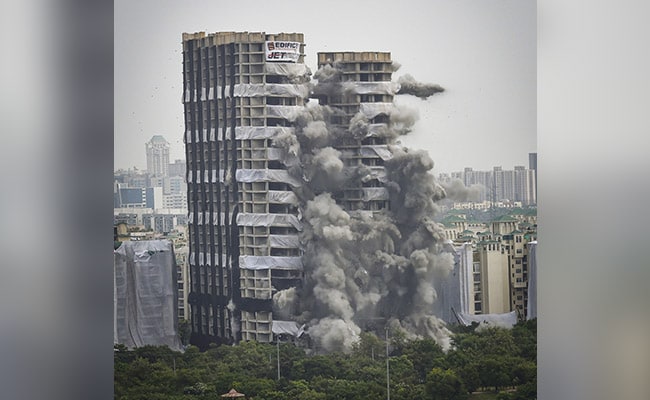 More than 3,700 kg of explosives were used in the demolition of Supertech twin towers.

The demolition of Supertech's twin towers in Noida is a lesson for all stakeholders in the real estate industry that accountability will be fixed if they violate building laws, according to industry leaders.

The state regulatory authorities under the Real Estate (Regulation and Development) Act, 2016 should be more empowered to take action against defaulters and protect consumers' interest, they added.

Supertech's twin towers Apex and Ceyane -- part of its Emerald Court project in Noida -- were safely demolished on Sunday, a year after the Supreme Court had ordered their razing. More than 3,700 kgs of explosives were used in the massive exercise.

"This decision is symbolic of the New India that we are living in, which is all about best practices, governance, and following the law. We stand by the authorities and Supreme Court in this decision," CREDAI (National) President Harsh Vardhan Patodia told PTI.

Most of the organised developers are adhering to all guidelines laid down by the authorities and this will act as a good reminder for those who do not, Mr Patodia added.

The Confederation of Real Estate Developers Associations of India (CREDAI) represents more than 13,000 developers across 221 city chapters in 21 states.

Another realtors' body NAREDCO did not comment on the demolition.

When contacted, leading property consultant Anuj Puri said: "It's a lesson for all stakeholders concerned. The top court has confirmed that If there are any violations, accountability will be fixed and going forward stakeholders will need to avoid any violations and remain within the purview of the law." Shishir Baijal, chairman and managing director, Knight Frank India, said it is a strong statement towards making real estate a transparent and responsible business segment.

"We feel that developers and buyers will take cautionary notes and ensure that their projects are free of ambiguity and have all necessary clearances," he said.

The top lesson from the demolition of the twin tower is that there is a continuous requirement for transparency in the sector.

"Actions like digitise land records available in public domain can help in further providing transparency. Further, RERA which has been implemented in different states with varying strengths, must be given more power to take punitive action against defaulters to protect the interest of end users," Baijal added.

"This is also a crucial lesson to all the developers to take decisions mindfully and bar themselves from doing illegal construction in future," he added.

After the enactment of RERA in India, Raheja said processes have become crystal clear and customers are able to access all technical information about projects on the RERA website.

The Delhi-NCR property market, one of the biggest in India, has been impacted severely over the last one decade because of defaults by developers in completion of real estate projects.

Jaypee Infratech, Unitech, Amrapali and The 3C Company are some of the big companies whose projects are stalled in Delhi-NCR. There are many other builders who have defaulted on their promises to deliver their projects on time to customers, who have already paid almost the entire purchase price and are also paying interest on home loans.

Homebuyers have approached various courts as well as the National Company Law Tribunal (NCLT) against the defaulting builders.

Mumbai-based Suraksha group in June last year received the approval of financial creditors and homebuyers to take over JIL, raising hopes for more than 20,000 homebuyers of getting possession of their flats.

Suraksha group is yet to get approval on its resolution plan from the NCLT.

In the case of Unitech, the Supreme Court in January 2020 allowed the Centre to take total management control of the company and appoint a new board of nominee directors. Yudvir Singh Malik was appointed as the new CMD after the central government superseded the Unitech board.

This decision was aimed to bring respite to over 12,000 hassled homebuyers of Unitech, but the customers are still waiting for the possession of their apartments.

In the case of Amrapali, state-owned NBCC has undertaken the completion of many residential projects in Noida and Greater Noida under the aegis of the Amrapali Stalled Projects and Investment Reconstruction Establishment (ASPIRE) and the supervision of the Supreme Court.

Around 40,000 homebuyers are stuck in various projects of Amrapali group.