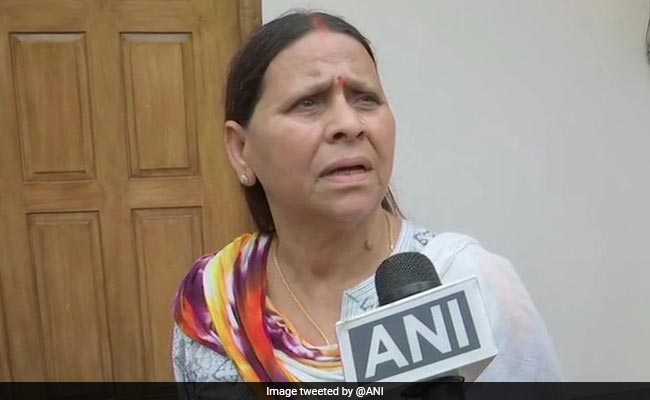 RJD leader Rabri Devi is keeping the door open for Bihar Chief Minister Nitish Kumar if the rival JDU's chief chooses to consider it's all water under the bridge, nearly two years after he pulled out his party from the Grand Alliance in Bihar.

"If Nitish Kumar joins the Grand Alliance again, we have no objection to it," Rabri Devi told reporters on Monday, news agency IANS reported.

A lot has happened since the Janata Dal United (JDU) left the Grand Alliance in July 2017. RJD chief Lalu Yadav was convicted in fodder scam cases and jailed, and the JDU chose to stay out of the new NDA government in the centre after the pan-India alliance swept the national election this year and Prime Minister Narendra Modi started his second term.

Nitish Kumar's stand that the party won't be part of the centre came after the JDU was offered only one symbolic slot in the new Modi cabinet. He returned the favour on Sunday by expanding the Bihar cabinet to add eight more of his party's lawmakers and none from the BJP. Mr Kumar's move is seen as a signal to the BJP that he is bracing for assembly elections.

Rabri Devi said the final call on whether to accept Nitish Kumar back in the Grand Alliance if he chooses to return would be taken by the top leaders of the RJD.

Senior RJD leader and former union minister Raghuvansh Prasad Singh has also suggested the RJD could be open to the idea of welcoming Nitish Kumar back to the political bloc under the changed circumstances in PM Modi's second term.

"He (Nitish Kumar) will surely switch sides but no one can predict when he would do that or what he would say. This has happened several times earlier. It's not surprising... All I want is that everyone should come together against the BJP," Mr Singh said, according to IANS.

Nitish Kumar's party won 16 of the 17 seats it contested in the national election. The BJP won all 17 they contested.

Both parties maintain ties between them are strong as ever.