No Cremation, No Help, Man Carries Covid Positive Wife's Body On A Cycle

While Covid has not made its presence felt in these areas, the locals know enough to fear it. 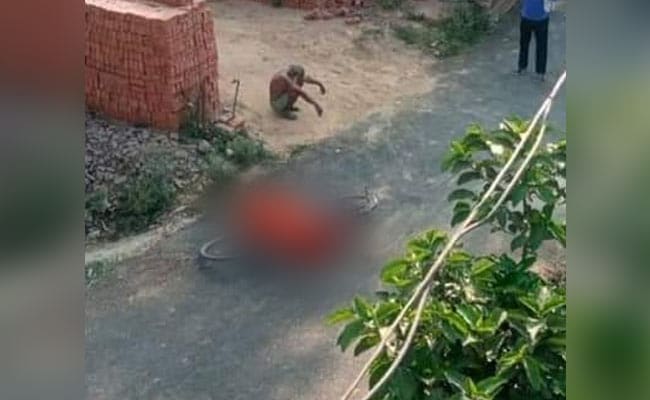 Sitting helplessly by the road, Tilakdhari was spotted by a passing policeman.

Two heart-wrenching photos from Uttar Pradesh have brought home the situation of Covid-hit families in rural Uttar Pradesh. One of the photos being circulated in social media shows an elderly, bearded man carrying the body of a woman on a bicycle. Another shows the bicycle fallen, the body sprawled across it.

The local police, who finally helped the man, revealed a harsh story of social boycott and fear.

The man in the photo, the police said, is 70-year-old Tilakdhari, a resident of Amberpur village in Jaunpur -- 275 km from state capital Lucknow. His wife had died of Covid at a government hospital.

The police said the hospital had sent her body back in an ambulance, but the villagers declared that they would not allow her cremation in the local cremation ground. This, they said, would ensure the spread of infection in the village.

While Covid has not made its presence felt in these areas, the locals know enough to fear it.

Unable to convince the villagers, Tilakdhari had decided to consign his wife's body to the nearby Sai river -- a not-so-frequent practice in the area.

The villagers, however, refused to help move the body.

In desperation, Tilakdhari decided to carry it on his bicycle, said P Upadhyay, a senior police officer of Madiyahoon, Jaunpur.

But halfway through, the 70-year-old could not maintain control over the cycle. It toppled and the body along with it.

Sitting helplessly by the road, Tilakdhari was spotted by a passing policeman, who informed his senior officer.

Soon, the police came, bringing all necessary items for a funeral. The cremation was conducted with the help of a local Muslim man.

Overall, the country recorded the highest single-day rise of 3,60,960 coronavirus cases this morning, which pushed the total to 1,79,97,267. The number of fatalities has crossed 2 lakh, with 3,293 deaths being recorded over the last 24 hours, showed data from the Union health ministry.