"No 5-Star Treatment, Can Sleep On Road": HD Kumaraswamy On Village Visit

HD Kumaraswamy's remarks come in response to a report that he was being given a luxurious treatment at the village. 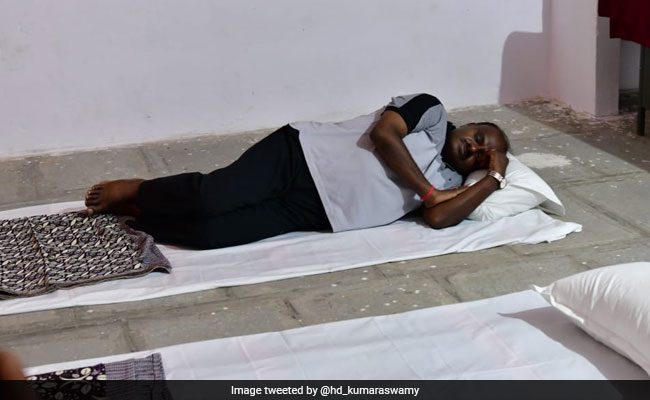 During his visit, HD Kumaraswamy tweeted photos of him sleeping on the floor.

Karnataka Chief Minister HD Kumaraswamy, who kick-started his village stay campaign ''Grama Vastavya 2.0'' from Gurmitkal in Yadgir district on Friday, denied reports of him getting a "5-star treatment" in a village stating that he was ready to sleep on the road.

"What 5-star arrangements? Ready to sleep on the road. Want to ask the Opposition if I cannot have this basic facility, how will I work every day? A small bathroom was built. I will not be taking it back with me," HD Kumaraswamy said during a press conference here in Chandraki village.

HD Kumaraswamy's remarks come in response to a report that he was being given a luxurious treatment at the village. Prior to his visit, renovation was done in the bathroom of a lodge he was supposed to stay.

On being asked about it, HD Kumaraswamy said: "It will help kids here. I came here on an ordinary bus. I did not come in a Volvo bus. I do not need to learn anything from BJP. I have slept in a hut as well as in a 5-star hotel. When my father was Prime Minister, I slept in Grand Kremlin Palace, Russia. I have seen everything in life."

During his visit, HD Kumaraswamy also interacted with school students to understand the problems faced by them.

"The meaning of coming to school is that through education there will be more development. Before I came, all officers went around villages and created awareness and identified beneficiaries of various schemes. All issues of the villagers are resolved now," he said.

Talking about the plight of the farmers in the state and loan waiver schemes meant for them, HD Kumaraswamy said: "I have detailed information on loan waivers. Rs 100 crore will be released to Kalaburagi District Central Cooperative Bank. The decision will be taken by the cooperative minister for new loans to farmers."