Of the 122 seats in JD(U)'s share, seven seats will go to Jitin Ram Manjhi's HAM. Of the BJP's 121 seats, some seats will be given to Mukesh Nishad's Vikassheel Insaan Party. 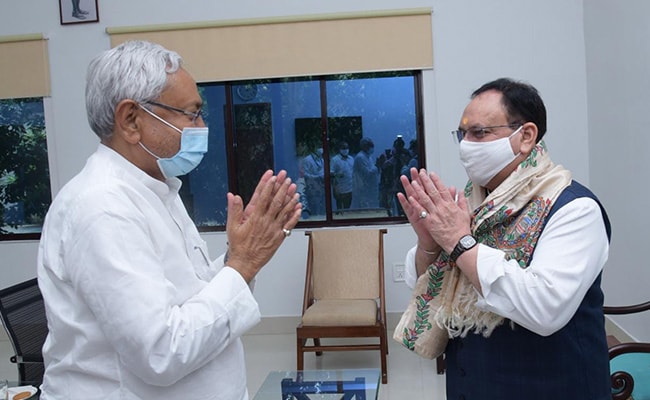 Nitish Kumar's JDU and BJP have reached a 122-121 seat deal for Bihar polls.

Nitish Kumar's Janata Dal United and the BJP have split the 243 seats of Bihar down the middle, the JD(U)'s "big brother" status in the state has earned it just one extra seat, sources said. The seat sharing deal will be announced tomorrow.

Of the 122 seats in JD(U)'s share, five seats will go to Jitin Ram Manjhi's HAM. Of the BJP's 121 seats, some will be given to Mukesh Nishad's Vikassheel Insaan Party or VIP.

The Vikassheel Insaan Party, which exited the opposition Grand Alliance yesterday, had announced that they would contest all 243 seats of the state. Party chief Mukesh Nishad, who is also a set designer in Bollywood, said his party will win a chunk of seats and will be crucial for government formation.

But throughout the day, the party has also been in talks with the BJP, the final announcement will be made during tomorrow's press meet, sources said.

Ram Vilas Paswan's Lok Janshakti Party, led by his son Chirag Paswan, has announced that it would contest against Chief Minister Nitish Kumar's Janata Dal United, but not against the BJP.

Citing ideological differences with the JD(U), the party said "all the candidates who win will form a BJP-LJP government" and added that there was no "sourness" in the relation with the BJP.

In an open letter to the people of Bihar today, Chirag Paswan wrote: "This decision has been taken not to rule Bihar but to be proud… This is the big defining moment in the history of the state of Bihar -- this is the question of life and death for 12 crore Biharis, we have no more time to lose".

The stance left the BJP's role open to speculation. A section of NDA leaders suggested that Chirag Paswan's bold move -- targetting Nitish Kumar for months and then going solo -- would not have been possible without the tacit support of the top BJP leadership.