The first supermoon of the new year 2018 on January 2 will be the biggest of the year. A supermoon is a lunar phenomenon that occurs when a full moon is at its closest point to earth. 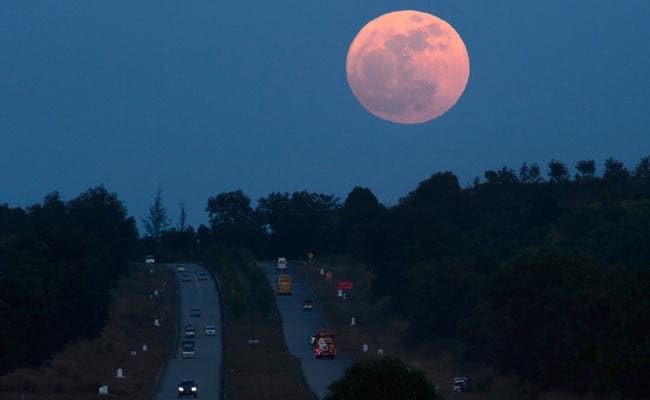 The first supermoon of new year 2018 is likely to gatecrash celebrations in Goa. (Photo: AFP)

New Delhi: The first supermoon of the new year on January 2 will be the biggest of the year. A supermoon is a lunar phenomenon that occurs when a full moon is at its closest point to earth. This makes the moon appear up to 14 per cent larger and 30 per cent brighter than the micromoon, according to NASA, and is among the must-watch celestial events. The new year's celebration in Goa, however, comes with a touch of caution due to the Supermoon phenomenon on January 2.

The tourism authorities in Goa have issued an advisory warning of unusual tidal activity and possible flooding of beaches on January 2 and January 31.

"January 2 and January 31, 2018 are full moon days where the moon would be the closest to the Earth in its orbit also known as Supermoon, due to which there is likelihood of a surge in the high tides and possibility of flooding of the beaches affecting the shacks, water sports and other beach activities," Goa Tourism Director Menino D'Souza's advisory said.

Mr D'Souza has also asked all businesses located along the coastline and in close proximity to the water to take safety measures in wake of the recurrence of the Supermoon. This will be the first supermoon of 2018.

Goa, the popular beach and nightlife tourism destination, is specially crowded the period from Christmas to New Year. Earlier in December 2017, a combination of cyclone Ockhi and Supermoon wreaked havoc on the beaches. Beach shack operators had complained about a lack of warning after rising water that damaged several beach shacks and eroded beach stretches.

This time, however, the warning comes in advance in form of an advisory before the first supermoon of 2018. "Shack owners, water sports operators and other activities on the beaches are hereby directed to be on high alert on January 1-2 and January 30 and shall take all precautionary measures for avoiding any dangers to life and property," the advisory added.