"Never got a chance to say Howdy Modi," stand-up comic Hasan Minhaj of Netflix's 'Patriot Act' tweeted, along with a link to his conversation with NBC's 'Late Night with Seth Meyers' 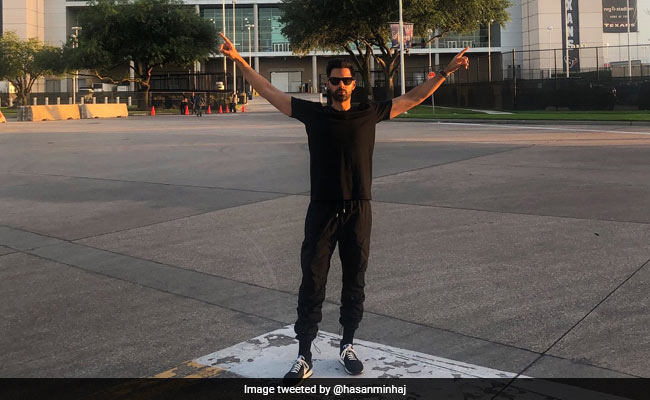 Hasan Minhaj outside NRG Stadium in Houston where 'Howdy, Modi!' was held

Comedian Hasan Minhaj, who hosts the popular Patriot Act show on Netflix, did not get a chance to say "Howdy, Modi" at Sunday's sold-out event in Houston where Prime Minister Narendra Modi and US President Donald Trump addressed over 50,000 people.

"Never got a chance to say Howdy Modi," the comedian tweeted, along with a link to his conversation with NBC presenter Seth Meyers.

Never got a chance to say Howdy Modi.https://t.co/6nQn4Gl8VH

"I have to be there. We submitted our press credentials and immediately got an email saying 'we are out of space'. You are out of space in a football stadium? C'mon," said Mr Minhaj in the talk show Late Night with Seth Meyers.

He said the organisers told him he has been denied entry to Houston's NRG Stadium "because of some of the comments you have made".

"Wow. I am sorry for making fun of cricket," the comedian said, adding the organisers of the event then replied, "No. the comments you have made about Prime Minister Narendra Modi are not appreciated and you have been blacklisted."

Mr Minhaj routinely takes a dig at current affairs in his comedy show on Netflix.

"They (President Trump and PM Modi) were full on swinging; it was a strange thing to see. But PM Modi had sold out NRG Stadium, and 50,000-plus people showed up. And then Donald Trump was all open. And I am like, oh, gotta go. This is like Jay-Z and Beyonce... so I gotta be there," said Mr Minhaj, drawing laughter from Mr Meyers.

"A lot of people in the Indian community don't rock with Trump, but because of this weird pairing they just had to stand for DJT. Like, imagine if you got Ed Sheeran ticket for free at the sold-out NRG Stadium and a week before, there is a special guest, Bill Cosby. You got a monster but I really wanna hear Shape of You..." Mr Minhaj said.

Before the event started, Mr Minhaj had tweeted his own photo with hands raised outside NRG Stadium, "Here to celebrate two great nations coming together. India first. But America first too. #HowdyModi"

The 'Howdy, Modi!' event gave PM Modi a chance to energise his relationship with Indian-Americans who are active political supporters. President Trump, meanwhile, faced a largely foreign-born audience who could be a potential pool of voters that could turn out to be critical in next year's presidential elections.