Suraj Chavan, working president of the NCP's youth wing who led the agitation said that they held a "Jawab Do" agitation against Kirit Somaiya when he visited the ED office. 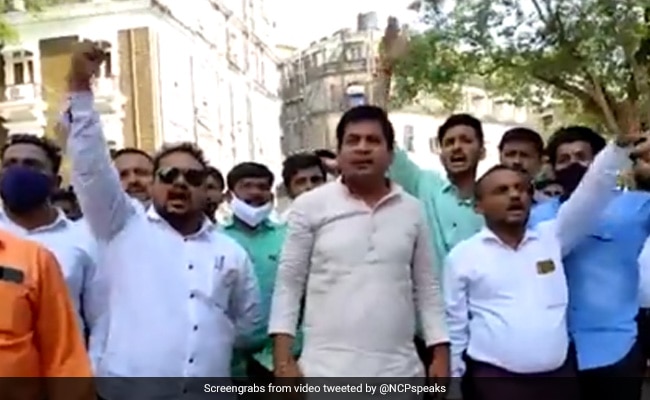 The NCP claimed a large number of youths participated in the protests.

The Nationalist Congress Party's (NCP) youth wing on Wednesday afternoon staged a protest outside the office of the Enforcement Directorate (ED) in south Mumbai when former BJP MP Kirit Somaiya reached there.

The protesters accused Mr Somaiya of being "selective" when it comes to filing and pursuing complaints against non-BJP leaders.

Suraj Chavan, working president of the NCP's youth wing who led the agitation, told PTI that they held a "Jawab Do" agitation against Somaiya when he visited the ED office.

Holding placards, the workers shouted slogans like "Kirit Somaiya Jawab Do" before they were detained by the police and taken to a police station.

Mr Chavan said the NCP wanted answers from Somaiya about what happened to the complaints he had filed since 2009 including against Narayan Rane, Kripashankar Singh, Vijay Kumar Gavit and Babanrao Pachpute- who all have joined BJP.

He said Mr Somaiya had filed complaints against these leaders when they were in Congress and NCP, but now he doesn't say a word about those complaints since these leaders have crossed over to BJP.

Elsewhere in Maharashtra, the NCP's youth wing on Wednesday staged agitations against rising inflation and a sharp spike in the prices of fuel and cooking gas cylinders.

The NCP claimed a large number of youths participated in the protests.