As He Feuds With "Captain", Navjot Sidhu Granted Meet With Rahul Gandhi

Navjot Singh Sidhu had reportedly been camping in Delhi since Friday to try and meet Rahul Gandhi, who has himself offered his resignation over the Congress's drubbing in the national election. 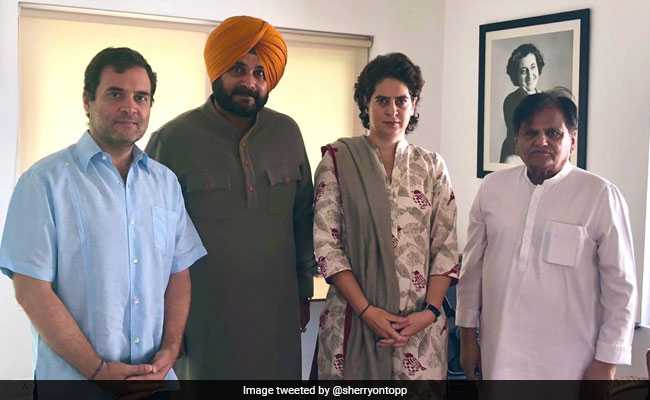 Punjab Minister Navjot Singh Sidhu, who has been at war with Chief Minister Amarinder Singh and was moved to what is seen as a less weighty portfolio last week, met with party President Rahul Gandhi today and submitted a letter. The sulking former cricketer-turned-politician is yet to take charge in his new ministry.

"Met the Congress President, handed him my letter, appraised him of the situation (sic)," Navjot Sidhu tweeted on Monday. It is not confirmed whether Mr Sidhu offered his resignation, as some reports suggest.

Mr Sidhu's tweet also included a photo in which he is flanked by Rahul Gandhi and his sister Priyanka Gandhi Vadra, who joined the Congress in January. Congress leader Ahmed Patel, a close aide of Rahul Gandhi's mother and former Congress chief Sonia Gandhi, is also in the photo.

That he did get an audience with the party leadership in his running feud with Amarinder Singh is seen as very significant.

Amarinder Singh aka "Captain" last week took away the Local Government portfolio from Mr Sidhu and assigned him Power and New and Renewable Energy Sources. His other portfolio of Tourism and Cultural Affairs was also taken over by the Chief Minister.

"The Captain" also kept him out of crucial consultative groups announced on Saturday to review progress and make changes in the government's flagship programmes and schemes.

Mr Sidhu had reportedly been camping in Delhi since Friday to try and meet Rahul Gandhi, who has himself offered his resignation over the Congress's drubbing in the national election. Two weeks since he made his decision clear before the Congress Working Committee, Rahul Gandhi has refused to change his mind despite his party men pleading with him.

In a bleak national election performance, Punjab delivered a relatively better outcome for the Congress. The party won eight of 13 Lok Sabha seats but is plagued by the unrelenting turf war between Amarinder Singh and Mr Sidhu.

Mr Sidhu accused the Chief Minister of blocking his wife Navjot Kaur's candidature from Amritsar. In a sulk, he went off the grid for more than 20 days without any explanation.

On the day of the results, May 23, Amarinder Singh had said the Congress failed to do well in urban areas because Mr Sidhu had handled his portfolio poorly.

On June 6, hours after the first state Cabinet meeting since the election -- Mr Sidhu skipped that meet -- the Chief Minister reshuffled the portfolios of most of his ministers, including Mr Sidhu.

Amarinder Singh said the changes he had made to ministers' portfolios would "help further streamline the governing system and processes" and bring more transparency and efficacy to various departments.

Mr Sidhu held a Facebook Live session the same day and said: "I cannot be taken for granted...I have been singled out in spite of collective responsibility."

Most of the ministers, except Mr Sidhu, have assumed their new offices, news agency IANS quoted an official as saying.