Officials said that on Tuesday, Sonia Gandhi's response was sought to around 30 questions regarding her involvement with the National Herald newspaper and Young Indian Pvt Ltd 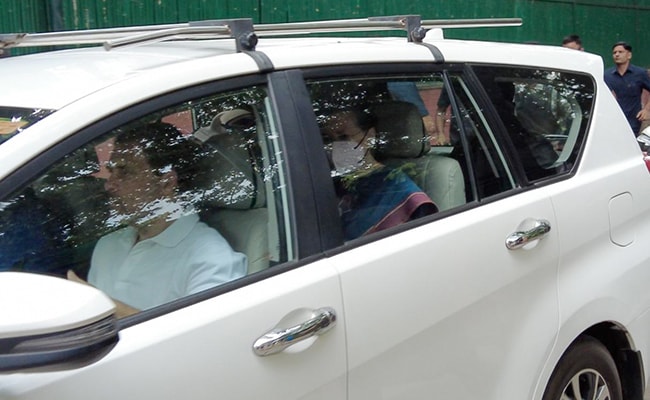 She left the ED office at around 7 pm on Tuesday

A day after the Enforcement Directorate questioned Congress President Sonia Gandhi for over six hours on the second day of her appearance in connection with a money laundering case linked to the National Herald newspaper, the 75-year-old has been asked to appear again on Wednesday, officials said.

Officials said that on Tuesday, Sonia Gandhi's response was sought to around 30 questions regarding her involvement with the National Herald newspaper and Young Indian Pvt Ltd, the company under investigation.

Her questioning at the ED office in central Delhi went on for nearly 2.5 hours beginning at 11 am and continuing after a 90-minute lunch break until 7 pm. Her questioning was conducted by a team led by additional director Monika Sharma.

During her questioning on Tuesday, the Lok Sabha MP from Rae Bareli was asked about the functioning and running of the newspaper, the role of its various office bearers, and her and Rahul Gandhi's involvement in the affairs of the National Herald and Young Indian.

Officials said the agency would also confirm her statement with that of Rahul Gandhi, as both are majority stakeholders in Young Indian Pvt Ltd.

Condemning the agency's action, Congress called it a "political vendetta". The Delhi Police made a massive deployment and cordoned off the lane from Sonia Gandhi's residence to the ED office to prevent a law and order situation. Restrictions were imposed on the movement of traffic in the area.

Rahul Gandhi and Congress MPs gathered at the Vijay Chowk to march to the Rashtrapati Bhavan to draw the President's attention to the alleged misuse of central agencies by the government when they were stopped by the police.

"I am not going anywhere. We wanted to go towards the President's house. But the police are not allowing us," Rahul Gandhi had said.

The Delhi Police and personnel of the security forces were caught on camera, manhandling Congress workers and leaders.

Srinivas BV, the national president of the Youth Congress, was seen being pulled out of his car by the Delhi Police, who tugged at his hair in gruesome visuals from the Congress's protest in the national capital. The police were seen pushing and shoving the leader inside their car as he tried to speak to the media gathered there.

"Mujhe maar kyun rahe ho (Why are you hitting me?)," the leader is seen screaming at the police, who later try to calm him, saying, "Koi nahi marega (no one will hit you)."

Earlier, Sonia Gandhi could not appear for questioning on June 8 after testing positive and being hospitalized for COVID-19. The Congress leader had developed a mild fever on June 1 evening and was found COVID-19 positive upon testing the next morning.

After her discharge from the hospital, she had asked for more time to appear before the agency.

The case to investigate alleged financial irregularities under the PMLA was registered about nine months ago after a trial court took cognisance of an Income Tax department probe carried out on the basis of a private criminal complaint filed by former Bharatiya Janata Party (BJP) MP Subramanian Swamy in 2013.

The YIL promoters include Sonia Gandhi and Rahul Gandhi. Swamy had alleged that the Gandhis cheated and misappropriated funds, with YIL paying only Rs 50 lakh to obtain the right to recover Rs 90.25 crore that AJL owed to Congress.

Congress argued that YIL is a not-for-profit company under Section 25 of the Companies Act, 1956 that can neither accumulate profits nor pay dividends to its shareholders.

Calling it a case of political vendetta, senior Supreme Court advocate and Congress leader Abhishek Singhvi had said, "This is truly a very weird case -- an alleged money laundering case on which summons are issued with no money involved." The federal agency's move followed the questioning of senior Congress leader Mallikarjun Kharge and Congress Treasurer Pawan Bansal in April this year.

The agency then recorded the statements of both the Congress leaders then under the PMLA. The National Herald is published by AJL and owned by YIL. While Kharge is the CEO of YIL, Bansal is the Managing Director of AJL. The ED is investigating the shareholding pattern and financial transactions as well as role of party functionaries in the functioning of AJL and YIL.