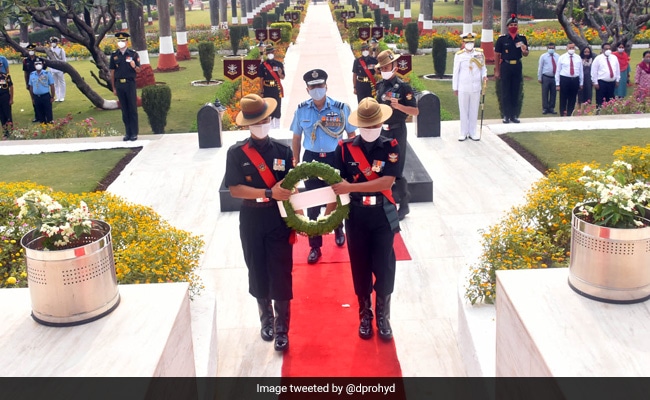 The National Defence Academy (NDA) today paid homage to Colonel Viplav Tripathi, who died in the line of duty during an ambush by terrorists in Churachandpur district of Manipur.

"His martyrdom will continue to inspire future generations of the NDA cadets," a defence release said.

Colonel Tripathi, the Commanding Officer of Khuga Battalion of the Assam Rifles, his wife Anuja (36), son Abir (5) and four personnel of the paramilitary force were killed in the ambush on Saturday.

A wreath-laying ceremony was held today at the ''Hut of Remembrance'' in the National Defence Academy at Khadakwasla here in the honour of Colonel Tripathi, the release said.

Air Marshal Sanjeev Kapoor, Commandant, NDA, paid homage to the braveheart in a solemn ceremony on behalf of the NDA fraternity. All key officials of the academy and representatives of 102 Course NDA were present to pay homage to the officer, it said.

Colonel Viplav Tripathi was an alumnus of 102 NDA Course, M Squadron. After passing out from the Indian Military Academy (IMA) in May 2002, he was commissioned in the 2 Kumaon Regiment of the Indian Army, the release said.

"Today, as his name gets inscribed in golden letters with full military honours in the sacred Hut of Remembrance, his martyrdom will continue to inspire future generations of the NDA cadets. The NDA fraternity offers heartfelt condolences to the bereaved family in this hour of grief," the release said.

On Monday, last rites of the Colonel were held with full military and state honours in his hometown Raigarh in Chhattisgarh, and his wife and son were cremated and buried, respectively.