The Home Ministry on Wednesday said the power situation in eight of the nine cyclone-hit districts of Odisha has improved. 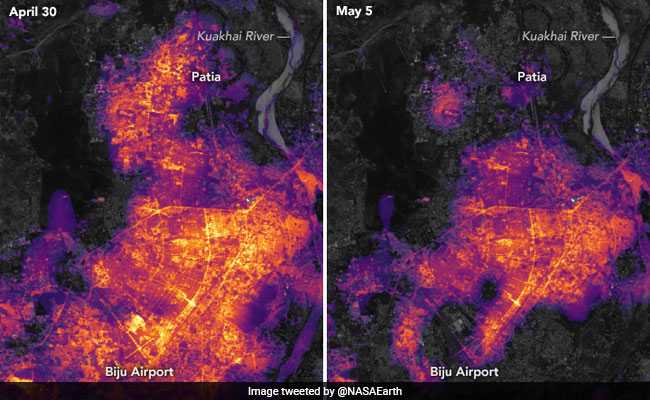 NASA captures lighting in twin-cities of Bhubaneswar and Odisha after Cyclone Fani.

Millions of households had plunged into darkness after Cyclone Fani, one of the worst storms to hit India since 1999, made a landfall in Odisha last week and killed over 40 people. NASA today released several images comparing the lighting in Bhubaneswar and Cuttack, often referred as twin cities, before and after the storm.

In an article shared on its website, the US space agency explains that the images show "where the lights went out across some of the worst affected areas in Odisha." "The images show city lighting on April 30 (before the storm) and on May 5, 2019, two days after Fani made landfall. The storm destroyed several transmission towers and uprooted as many as 156,000 utility poles that must re-installed," the article reads.

NASA also shared the pictures on its Twitter handle.

Power outages in #Bhubaneswar and #Cuttack after Cyclone #Fani. https://t.co/X7A9NYDsGi#NASA#Indiapic.twitter.com/fA4raahpyb

Cyclone Fani had made a landfall in Odisha on May 3. Almost a million people from the state were evacuated to nearly 5,000 temporary shelters hours before its landfall. Puri, Bhubaneswar, Cuttack, and Khurda were among the worst-affected districts.

The Home Ministry on Wednesday said the power situation in eight of the nine cyclone-hit districts of Odisha has improved. "The state government has informed the Centre that situation in eight out of nine districts has improved and power and telecom services are gradually picking up in the worst-affected areas of Puri and Bhubaneswar," a home ministry statement said.

In its article, however, NASA cited reports to highlight that "only a few per cent of the people in Bhubaneswar have electricity".

Elaborating how the images were captured, the US space agency said the were made from "data acquired by the Visible Infrared Imaging Radiometer Suite (VIIRS) on the Suomi NPP satellite". "A team of scientists from NASA's Goddard Space Flight Center and Marshall Space Flight Center processed and corrected the raw VIIRS data to filter out stray light from natural sources (for example, moonlight) and from atmospheric interference, such as dust, haze, and thin clouds," the article reads.