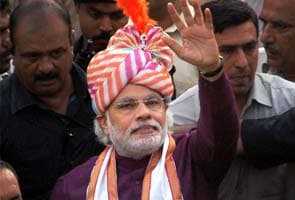 New Delhi: Gujarat Chief Minister Narendra Modi is under fire for attributing the high rate of malnutrition in his state to "beauty conscious" young girls watching their weight.

US daily the Wall Street Journal has quoted Mr Modi as explaining the challenge of malnutrition in Gujarat thus, "Gujarat is by and large a vegetarian state. And secondly, Gujarat is also a middle-class state. The middle-class is more beauty conscious than health conscious - that is a challenge. If a mother tells her daughter to have milk, they'll have a fight. She'll tell her mother, 'I won't drink milk. I'll get fat'." (Click here to see Mr Modi's interview with the Wall Street Journal)

The context of the question reportedly was that according to latest government data available, about half of Gujarat's children under five were short for their age or had stunted growth. Mr Modi's answer has many flummoxed and angry; they point out that five-year-old girls anywhere are scarcely known to be figure-conscious.

Arjun Modhwadia, who heads the Congress' Gujarat unit, has lashed out at the Chief Minister saying, "This is not just a joke but is an insult to all women."

Union minister Ambika Soni said. "The Chief Minister who claims that he is the one of the best administrators in the world  has given a childish and immature statement like this. He is not at all sensitive. The women of Gujarat sacrifice everything and work hard to raise their families, and 'he says that she is not eating because she is beauty conscious'."

But the BJP's Prakash Javadekar dismissed this criticism as Congress' "Modi-phobia". He said "...they are afraid of Modi and that's why they criticise him, even on non-political subjects."

Social networking site Twitter, which is Mr Modi's preferred choice for communicating his views, is abuzz with criticism of the Gujarat CM's remark. There is sarcasm when Farzana Versey tweets, "I think we can blame Venezuela for Modi's logic abt malnutrition in girls under five to 'fashion consciousness' (sic)."

And dismay too. "Shocking to see what namo said @ reasons of malnutrition. Not expected from him who usually understands things so well. Pathetic (sic)," tweeted Kashyap Shah.

Another user Shantanu echoed the same sentiment. "I mean how clueless and insensitive do you have to be to think that undernourishment is a self-imposed condition?" he wrote.

"Modi's claim that malnutrition is a consequence of girls being beauty-conscious is up there with Reagan's claim that ketchup is a vegetable," added Dilip D'Souza.

Promoted
Listen to the latest songs, only on JioSaavn.com
In the same interview Mr Modi also promises to fix the problem soon, but most stopped reading beyond his words on figure-conscious young girls.