PM Narendra Modi will have a very busy schedule in the UK. Some of the key interactions include the bilateral meeting with Britain's Prime Minister Theresa May and a meeting with Queen Elizabeth II at the Buckingham Palace. He will also hold a diaspora event 'Bharat Ki Baat, Sabke Saath'

PM Narendra Modi is in UK to attend the Commonwealth Summit. He met Theresa May this morning

London: After a busy day in Stockholm, Sweden, which saw him attending ten high-level meetings in ten hours, Prime Minister Narendra Modi has reached the UK today for a four-day visit. PM Modi, who is in London to attend the Commonwealth Heads of Government Meeting or CHOGM, will have both bilateral as well as multilateral meetings with different heads of states attending the meeting. He will have a top-level meeting with Britain's prime minister Theresa May as well as a meeting with Queen Elizabeth II at the Buckingham Palace.

This morning, PM Modi met British Prime Minister Theresa May for breakfast. The two leaders discussed ways to deepen ties between India and the UK.

Britain's foreign secretary Boris Johnson, who received Prime Minister Modi at London's Heathrow airport yesterday, said he was "excited" about the growing India-UK bilateral trade. He went on to say that this visit by PM Modi will help build on "huge economic advantages".

"..thanks to our shared history, we have a living bridge between us, and now we want to build on the incredible tech sector where both India and the UK are making giant strides together," Mr Johnson said in a statement.

PM MODI'S SCHEDULE IN THE UK

Prime Minister Modi is set for a packed first day today. His official engagements began with the bilateral meeting with British Prime Minister Theresa May at 10 Downing Street. The two leaders are expected to discuss a wide range of issues of mutual interest, including cross-border terrorism, visas and immigration. 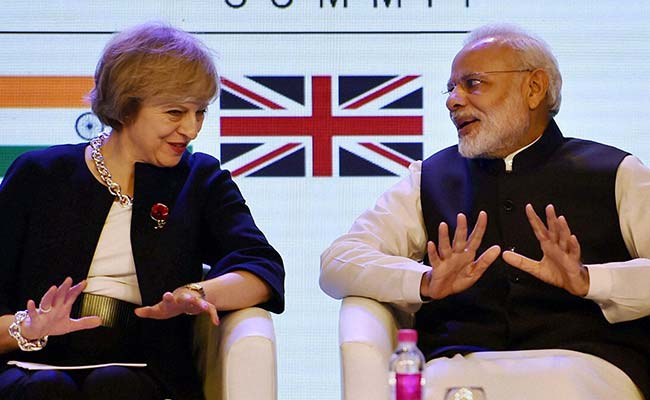 A memorandum of understanding (MoU) on the return of illegal immigrants, which had expired in 2014, will be officially renewed to take into account biometric and other developments in the field. India and the UK will sign nearly a dozen agreements across different sectors.

PM Modi will then head to the Science Museum in London to visit the '5000 Years of Science and Innovation' exhibition where he will interact with Indian-origin and other scientists and innovators based in the UK. The event, hosted by Prince Charles, will include the launch of a new Ayurvedic Centre of Excellence, aimed at creating a first-of-its-kind global network for evidence-based research on yoga and Ayurveda. The Ayurveda Centre of Excellence in London has been set up at the University of Westminster.

Prime Minister Modi will also welcome the UK into the International Solar Alliance, as its newest member. This will be followed by PM Modi attending a special technology event hosted for him by Prince Charles. The 'Tech Summit' is part of India-UK bilateral ties. Prince Charles is expected to drive in to the event in a fully electric Jaguar for the first time. Jaguar-Land Rover has made tremendous strides since it was taken over by the Tata's.

From here, PM Modi will have a brief stop to garland the Basaveshwara statue -- which he had inaugurated during his last visit to the UK in 2015 -- on the banks of the river Thames. This will be followed by his second meeting with Theresa May at an event hosted by the British prime minister at the Francis Crick Institute.

Prime Minister Modi will then have an interaction with Indian-origin scientists working on cancer research, malaria and other tropical diseases. Both he and Prime Minister May will initiate the India-UK CEOs Forum, where both prime ministers will interact with top CEO's from India and the UK to take business interests forward.

PM Modi is then scheduled for a private audience with Queen Elizabeth II at the Buckingham Palace. The Queen had personally invited PM Modi by writing to him ahead of the Commonwealth Summit.

At the end of the day, Prime Minister Modi will interact with the Indian diaspora at a mega event titled 'Bharat Ki Baat, Sabke Saath'. The event will be broadcast live from the iconic Central Hall Westminster in London tonight. It will be aired on television at 9 pm IST.

The diaspora event, billed as the centrepiece of the 'Living Bridge' theme of the India-UK bilateral visit, will involve Prime Minister Modi addressing questions from across the world which have already been received via social media. At the end of the live telecast, he will join Heads of Government from 52 other Commonwealth countries at a dinner hosted by the British prime minister as a formal welcome to Commonwealth Summit.

This will be followed by the executive session of the Commonwealth heads of states in London tomorrow before they head to Windsor for the Commonwealth retreat, where the world leaders will interact on an informal basis.

This will conclude Prime Minister Modi's UK visit after which he will leave for India. On his return, PM Modi will have a brief stopover in Germany, where he will have a top-level meeting with German Chancellor Angela Merkel in Berlin.

INDIA'S ENHANCED ROLE IN THE COMMONWEALTH

According to official estimates, the India-UK bilateral trade stands at $13 billion, with the UK being among the largest G20 investors in India. PM Modi's visit will have a particular focus on the India-UK technological partnership as well as New Delhi's enhanced role in the Commonwealth.

An Indian prime minister is attending the Commonwealth summit, which is held every two years, after a hiatus of nearly a decade, having last attended the 2009 Commonwealth Summit in Trinidad and Tobago.

Promoted
Listen to the latest songs, only on JioSaavn.com
The Indian government has said that Prime Minister Modi's attendance at the summit this year symbolises the country's wider efforts to step up its role across global forums. This stepped-up engagement is likely to take the form of increased activity within the Commonwealth, including greater resources and manpower as well as financial contributions.