A team of 20 ITBP mountaineers was airdropped at the Nanda Devi base camp by an MI-17 helicopter of the IAF on Friday. 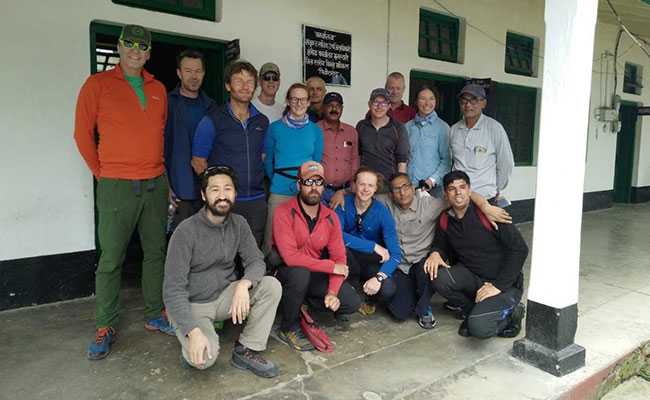 The team of mountaineers that went missing while climbing the Nanda Devi last week.

Bad weather has hampered search operations for an eight-member team of mountaineers that went missing while trying to scale the Nanda Devi East peak in Uttarakhand's Pithoragarh district late last month. Officials have little hope of finding any of them alive, and there are fears that fresh avalanches in the region may have buried their bodies deeper in the snow.

The team, including seven mountaineers from the United Kingdom, United States and Australia, left Munsiyari on May 13 to scale the 7,434-metre peak. An aerial search was taken up after they failed to return to their base camp by May 31, and three days later, Indian Air Force (IAF) choppers sighted five bodies lying near an unscaled peak.

A team of 20 mountaineers belonging to the Indo-Tibetan Border Police (ITBP) was airdropped along with supplies at the Nanda Devi base camp by an MI-17 helicopter of the IAF on Friday. They are still undergoing the mandated acclimatisation procedure required for operating in altitudes of over 15,000 feet.

According to sources, fresh snowfall affected the movement of mountaineers as well as choppers today. The ITBP had earlier called in its high-altitude porters from Uttarkashi to dig out the bodies and bring them down to the base camp, so they could be taken to the district headquarters at Pithoragarh.

The ill-fated team of mountaineers comprised John McLaren, Rupert Whewell, Richard Payne, Anthony Sudekum, Ronald Beimel, Ruth McCance and Chetan Pandey. They were led by British mountaineering expert Martin Moran, who had already scaled the peak twice in the past.

The eight mountaineers had reportedly taken an untested route without permission, resulting in the tragedy. Officials told NDTV that although Martin Moran's team was supposed to climb only till the second base camp, they later announced plans to attempt an "unclimbed peak" about 6,477 metres high.

"This mountain range is more difficult to scale than Mount Everest. They knowingly risked their lives by changing their plans without informing the authorities," an official involved in the operation said on the condition of anonymity. He further said that any such deviation from approved routes are completely "illegal".

The aerial pictures had showed four bodies lying together and another buried at a distance on a ridge swept away by an avalanche. Three more were believed to be nearby.

The ITBP team consists of experienced mountaineers, having climbed several peaks including the Mount Everest.