Lok Sabha Elections 2019: "Any political publicity materials/contents, being displayed on electronic media without the requisite certification from competent authotity should be removed immediately," the Election Commission wrote

NaMo TV, the 24-hour channel exclusively featuring Prime Minister Narendra Modi's speeches and pro-BJP content in the middle of the national election, has been barred by the Election Commission from airing any political content that has not been certified. In a letter to the Delhi Chief Electoral Officer, the Election Commission said any political publicity material on electronic media without certification should be removed immediately as the Model Code of Conduct is in place.

"As NaMo TV/Content TV is sponsored by a political party, all recorded programmes of political contents displayed on the channel/platform would be covered under the purview of the Commission's Order..." the Election Commission's letter reads.

"Any political publicity materials/contents, being displayed on electronic media without the requisite certification from competent authority (MCMC in this case) should be removed immediately and any political content shall only be permitted strictly in accordance with the ECI instructions in this regard," the letter adds.

The Delhi Chief Electoral Officer had told the commission that the logo of NaMo TV, which the BJP said is part of the NaMo App that it owns, had been approved but did not "certify" the content as it contained the old speeches of Prime Minister Narendra Modi.

Today's directive comes a day  after the Election Commission stopped the release of "PM Narendra Modi", a biopic on the Prime Minister, till the end of national elections on May 19. The commission said that any biopic "which has the potential to disturb the level playing field during the elections should not be displayed in the electronic media", effectively banning the screening of the film, just a day before its release, coinciding with the start of elections.

The poll body had yesterday also ordered the producers of ''Laxmi''s NTR'' and ''Udyama Simham'', the two biopics based on the lives of former Andhra Pradesh Chief Minister N T Rama Rao and Telangana Chief Minister K Chandrashekar Rao respectively, not to release the movies till further orders.

Here is the full text of the Election Commission's letter barring airing of political content by NaMo TV: 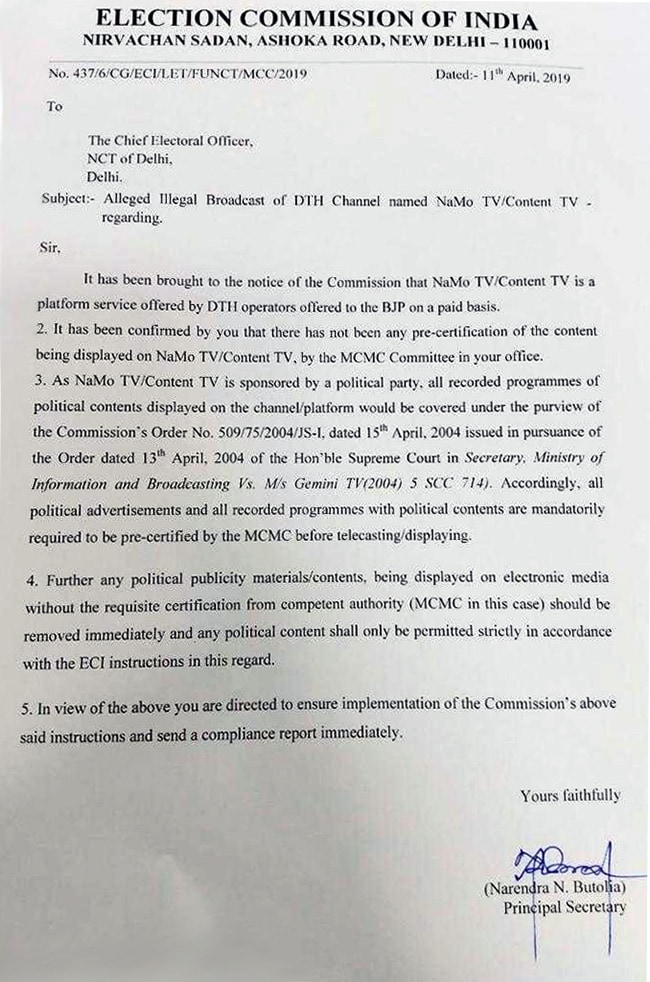