Coronavirus: Gujarat Congress President Amit Chavda alleged that the virus spread in the state when thousands of foreigners came to Ahmedabad ahead of Donald Trump's visit. 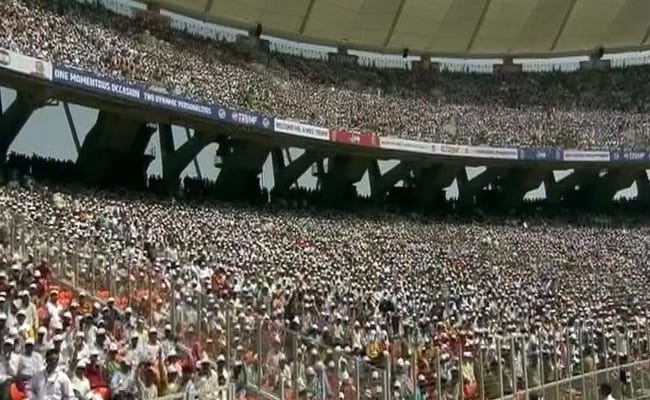 The Gujarat Congress on Wednesday alleged that the "Namaste Trump" event, organised by the state BJP government in Gujarat, on February 24 was responsible for the spread of coronavirus in the state.

State Congress President Amit Chavda said his party wants an independent probe by a Special Investigation Team (SIT) into this, and that they will approach the Gujarat High Court soon against government's "criminal negligence".

However, the state BJP unit dismissed the allegation as baseless, saying the event was organised well before the World Health Organisation (WHO) declared COVID-19 as a pandemic, and the first coronavirus case in the state was reported nearly a month after the event.

On February 24, US President Donald Trump along with Prime Minister Narendra Modi took part in a road show in Ahmedabad which was attended by thousands of people.

After the road show, the two leaders addressed a gathering of over one lakh people at the Motera cricket stadium, run by Gujarat Cricket Association (GCA).

Gujarat reported its first coronavirus cases on March 20, when samples of a man from Rajkot and a woman from Surat tested positive for the disease.

Mr Chavda in a video message said, "In January itself, WHO clearly said the coronavirus spreads from one person to another. It had asked all the countries to refrain from organising large gatherings. Despite such warning, "Namaste Trump" was planned for political gains and permission was also granted by the Gujarat government."

He alleged that the deadly coronavirus entered Gujarat and spread among people due to this mega event as thousands of foreigners came to Ahmedabad ahead of Donald Trump's visit.

"People were asked to stand shoulder to shoulder on the road to greet the leaders. Lakhs of people were brought to the stadium in buses. This triggered the spread of the virus. This event was not a mistake, but a criminal negligence. The "Namaste Trump" event was responsible for community transmission of the virus," Mr Chavda alleged.

"We will soon file a petition in the Gujarat High Court demanding a judicial inquiry in it by an SIT comprising field experts as its members. We will demand action against the government, GCA and the "Trump Abhivadan Samiti" (committee formed to organise the event) through this petition," he added.

"Amit Chavda needs to understand that before Trump visits any country, a US team conducts a thorough inspection of the areas well in advance to ensure there are no security and health related risks, such as viral infection. Without such clearance, Trump never visits any country," he said.

Moreover, coronavirus was not declared a pandemic by WHO when the "Namaste Teump" event took place, he said.

The event took place on February 24, and WHO declared COVID-19 a pandemic on March 11, he said.

"The first coronavirus cases in Gujarat was reported on March 20, almost a month after the event. Amit Chavda is making baseless allegations for vote bank politics," Mr Vala said.

Gujarat has so far reported 6,245 coronavirus cases and 368 deaths.