Nag Panchami: Know Why The Day Is Important For Devotees Of Lord Shiva

Nag Panchami 2020: Devotees of Lord Shiva and Vishnu observe the day with great reverence. On this day, in the month of Sawan, devotees pray to the Naga Devta or the snake god. 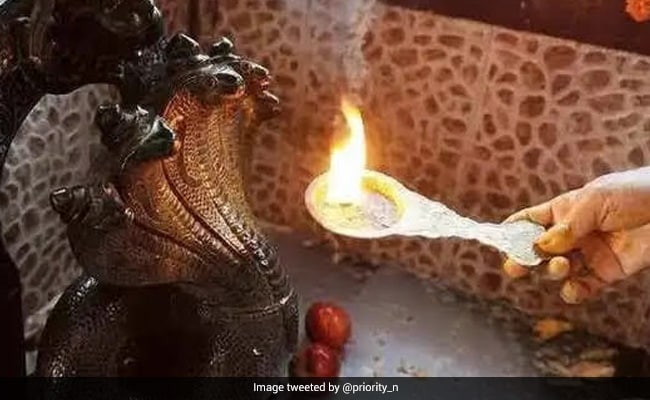 Nag Panchami today: Devotees of Lord Shiva have been tweeting wishes and prayers

Snakes have long been linked with many Gods in Hindu mythology. The 'snake with six heads' or 'Sheshnag' was the vehicle of Lord Vishnu and according to some scriptures, the world rests on the head of the Sheshnag

Nag Panchami is one of the oldest festivals celebrated across India, during the rainy season. Nag Panchami is also known as Nag Chaturthi or Nagul Chavithi. In Gujarat, Nag Panchami is observed few days after most states and this year it will be observed on August 8. In Andhra Pradesh, the puja is done just after Diwali.

The main ritual is offering milk to the Nag Devta or the snake god. Offering milk to snakes is an old tradition in India on panchami tithi and it is said that the ritual keeps evil away. Many also observe fast on that day. Food made with milk as a key ingredient is also offered as prashad to the god.

People are known to make snake idols with clay at home for puja. Milk, turmeric, kumkum and flowers are used for puja. Flowers and milk are also kept near the burrows and holes where snakes may be found.

According to Hindu scriptures Lord Shiva's snake Vasuki took part in the Samudra Manthan, that explains the origin of amrita or the nectar of immortality. Vasuki helped both the devas and the asuras to bind him to Mount Mandara or Mandar Parvat so that they could use him as their churning rope to get the amrita from the ocean. Vasuki is mentioned extensively in Hindu scriptures and the epics of Ramayana and Mahabharata.

In the Buddhist mythology, Vasuki and the other snake gods appear in the audience when Gautama Buddha gave his sermons. In India, devotees pray to several snake gods on Nag Panchami. Some among them are Ananta, Shesha, Padma, Kambala, Kaliya and Vasuki.